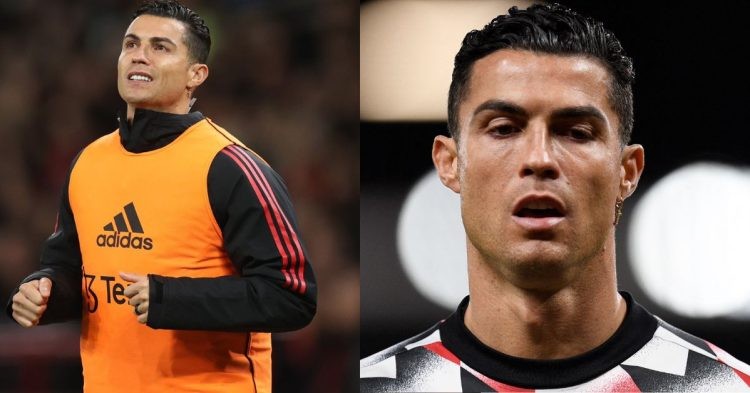 Cristiano Ronaldo has been once again in the limelight due to his growing frustration and anger. Ronaldo has been involved in a lot of actions of ignorance and egoistic behavior in recent times at Manchester United.

We saw Cristiano Ronaldo storming down the tunnel before the final whistle at Old Trafford. United, with their compelling gameplay, thrashed Antonio Conte’s Tottenham Hotspur 2-0 at home.

The incident of Ronaldo storming down the tunnel has been in the headlines rather than United’s brilliant performance. The 37-year-old has been all over the headlines for his antics and actions in the match.

Misery for Cristiano Ronaldo goes on

It hasn’t been a good season for the Portuguese striker, who has just started 2 games in the Premier League so far. Furthermore, this is the first time in his career that he has been deprived of Champions League football.

Instead, he is now playing in the second tier of the Europa League for Manchester United. He tried his best to move away from Old Trafford, but he failed as no club was interested in signing him this summer.

But he had some hope when he started the match against Newcastle United. But the Portuguese striker disappointed again. He just couldn’t adapt to the pace of the game, leading to another shambolic performance.

Meanwhile, these circumstances lead to yet more misery for Cristiano Ronaldo. He was once again left on the bench which increased his tally to the sixth time this season.

89th minute. What's the point leaving when he could've just waited an extra few minutes then vent his frustrations privately to avoid headlines?

Antony, Sancho.. our young players all love and look up to him. Blame Ten Hag or Man Utd all you want, Cristiano Ronaldo was WRONG. pic.twitter.com/hI83Sp4d0G

Ronaldo’s frustration and anger were once again displayed by him last night at Old Trafford. As Erik Ten Hag didn’t think to bring him on the pitch, he went storming into the tunnel before the full time whistle had blown. As we saw a dominating performance by United last night against Spurs.

The audience was divided into two parts, as one criticized Ten Hag for not including Ronaldo in the line-up. Meanwhile, the others slammed the Portuguese talisman for not being happy for the team.

They think Manchester United should focus on their win rather than make it a big deal about Ronaldo walking down the tunnel. It hasn’t been the case so far.

In an interview with Sky Sports, Henry said, “I don’t know [about how to deal with the Ronaldo incident], that’s something the manager is going to have to deal with. There was a game, a magnificent game for Manchester United, the story shouldn’t be Ronaldo walking off. [No he doesn’t make the story], not for me, not for me.

"The boss (Ten Hag) is here for the team. He's not here for Cristiano Ronaldo"

However, the former Manchester United player had the same views on this issue.

He said, “I think everyone is different, I want to stay on the performance. It’s not to protect Cristiano or whatever. We don’t know if he even said to Ten Hag, I’m going in and we’re going to make a story just showing him walking. Maybe he said to Ten Hag I’m going inside to do some treatment so I don’t want to find any excuse but I want to be focused more on the performance of Man Utd, we need to stop talking every day about Cristiano.”

What repercussions will this frustration and anger lead to?

As we move on, this will lead to an increase in the tensions between Ronaldo and Ten Hag. Ten Hag either needs to punish him or deal with him quietly. He will once again sit on the bench in the future due to improper conduct if this goes on.

It has also been speculated that Cristiano Ronaldo will not be included in the team list against Chelsea on Sunday. Maybe, this is the inception where the bond between Erik Ten Hag and Cristiano Ronaldo starts to get a little tense.

“Cristiano will not be part of the Man United team for this Saturday’s game against Chelsea. Rest of the squad is fully focused on preparing for that fixture”. pic.twitter.com/NdztshOuSf

Manchester United travels to Stamford Bridge, London for a match against Chelsea in the Premier League on Sunday. Meanwhile, lack of game time in big matches might not suit Ronaldo’s ego and personality. However, it may build a sense of disbelief in him and in the hierarchy of the club.

As Cristiano Ronaldo started to be in the limelight he has gotten himself into some trouble. As tensions at Old Trafford rise on a regular basis, these catastrophic gestures by their superstar can be massively abysmal for Manchester United in near future.