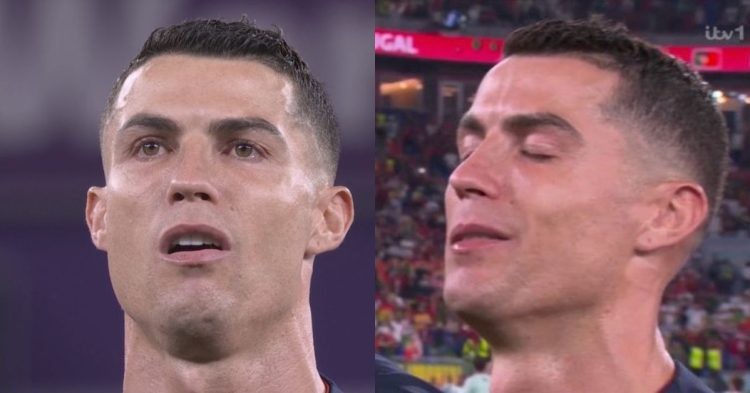 Cristiano Ronaldo appeared to be fighting back the tears as he sang the Portuguese national anthem before their World Cup match against Ghana.

The 37-year-old forward has been in the news consistently these past few weeks due to his prolonged falling out with Manchester United and found himself in an atypical position with the new Red Devils coach, Erik ten hag.

His falling out with the coach made people question the 5-time Ballon d’Or winner’s attitude and a call for Manchester United to cut ties with the forward were being made with Gary Neville leading this charge.

Cristiano Ronaldo is to leave Manchester United by mutual agreement, with immediate effect.

The club thanks him for his immense contribution across two spells at Old Trafford.#MUFC

The club announced on Tuesday that they had decided to release the forward seven months before his contract expires. Following his tell-all interview with Piers Morgan. His exit looked inevitable as the Portugal captain said he felt “betrayed” by the club.

While he deals with being released, he looks much more focused on Portugal’s World Cup campaign that started against Ghana at Stadium 974 in Doha.

After appearing from the tunnel alongside his teammates, the camera pans toward the Portugal players and we see an emotional Ronaldo with tears in his eyes and his bottom lip quivering.

The forward is appearing at his fifth World Cup and is aiming to bring the trophy home in his last tournament for Portugal. Fernando Santos’ side is in Group H, alongside Ghana, Uruguay, and South Korea.

The fans reacted to an emotional Ronaldo by flooding the comments with praises and wishes for the Portugal captain and his entire team, “Now let’s see if he can get the better and a good opening. GOOD LUCK PORTUGAL,” “Let’s bring it home Cristiano,” while others react to this World Cup being his last, “The last dance.”

Selecao beat the Black Stars 3-2 with Ronaldo opening the scoring for Portugal in the 65th minute via a penalty. Ghana was quick to respond with Andre Ayew, who scored the equalizer.

But, all efforts were in vain as Portugal quickly extended their lead by scoring two more goals through Joao Felix and Rafael Leao in the space of 2 minutes.

The Black Stars pushed hard and scored their 2nd goal of the game but couldn’t find a third goal to tie it up, marking the start of their campaign with a loss.