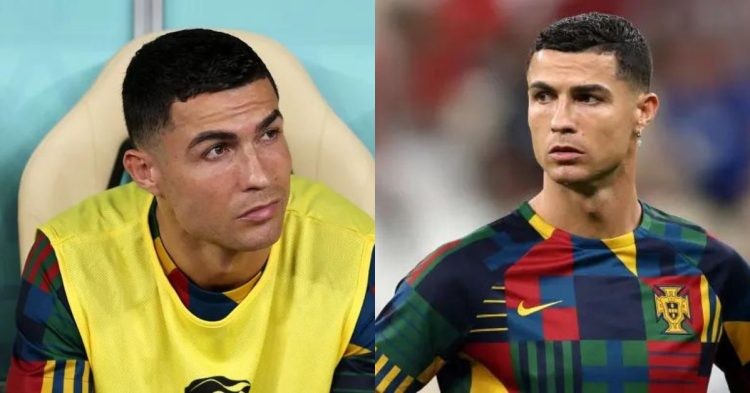 Cristiano Ronaldo came on as a substitute in the 73rd minute against Switzerland yesterday. Portugal’s dazzling 6-1 win will see them play Morocco in the quarter-finals on Saturday, 10th December. Ronaldo’s replacement, Goncalo Ramos scored a hattrick in his first World Cup start. The 21-year-old looks set to start in Portugal‘s future games as well.

Ronaldo’s future as a regular starter for Portugal’s national side has rightly come under question. Ronaldo failed to score even one goal from open play this World Cup. Across the whole season for Manchester United, he has scored just three goals. Reports from earlier this week indicated Ronaldo was very close to joining the Saudi Arabian side Al-Nassr.

Cristiano Ronaldo is not going to Saudi Arabia

Ronaldo spoke to the media after Portugal’s 6-1 win over Switzerland yesterday. He came on as a substitute in the 73rd minute for Joao Felix. Ronaldo did score a goal but it was ruled out for a clear offside. He was asked about his future regarding his move to Saudi Arabia. He was asked whether a move to Al-Nassr had been completed.

Cristiano Ronaldo on links of Al Nassr deal done: “No, that’s not true — not true”, he said after the game. 🚨🇵🇹🇸🇦 #Qatar2022

Al Nassr proposal, on the table — but no green light from Ronaldo as of now. pic.twitter.com/y2duCzmZtA

“No, it is not true,” he replied. The move to Al-Nassr has not been completed, yet. Ronaldo remains focused on the World Cup and is in search of other European clubs. He would go to Al-Nassr only if all other options were exhausted. At the moment Saudi Arabia seems to be the only possible destination. His lawyers are going through the massive $200 million deal Al-Nassr have presented him with.

Ronaldo had terminated his contract with Manchester United following a controversial interview with Piers Morgan. It seemed that the main purpose of the interview was to expose United’s mismanagement by the Glazers. Ronaldo also wanted to tell his side of the story about how Erik ten Hag had disrespected him.

In the end, Ronaldo would have wanted to leave United as soon as possible for a top European club. Unfortunately for him, no such bid has come forward. In his interview with Piers Morgan, Ronaldo said he had received a bid from another Saudi Arabian club Al Hilal. But he had rejected the bid as he was happy at Manchester United. He also said there were a few European clubs that were interested in him.

Ronaldo’s interest is to continue to play in the Champions League and top-level competitions, as he had said to Piers Morgan. His antics against managers he is playing under will reduce the chances of clubs wanting him. He has also been benched by two managers, and both teams (United and Portugal) have gone on to perform better without him than when he was in the starting eleven.