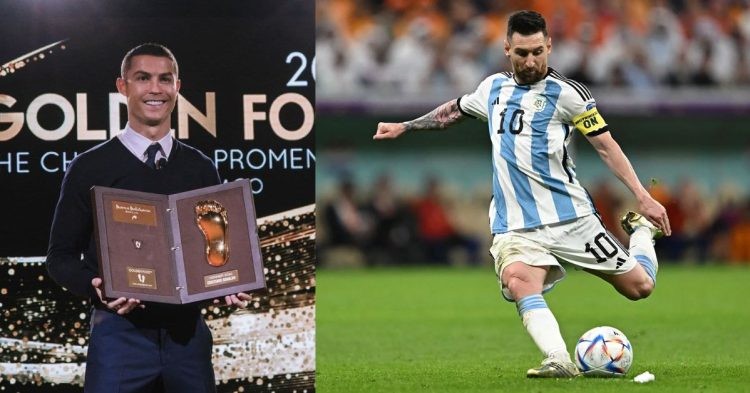 Lionel Messi has probably won everything there is to win in soccer. Messi’s already huge trophy cabinet had only one piece missing. However, Messi got the missing trophy a couple of weeks back when he led Argentina to FIFA World Cup glory. However, there is still one trophy that Messi does not have but Cristiano Ronaldo does.

As Lionel Messi was handed the crown of World Cup glory, fans believed that the GOAT debate was. Neither Messi nor Ronaldo had won a World Cup before the start of the FIFA World Cup 2022. Although Ronaldo’s wait for the trophy continues, Messi lifted the coveted World Cup trophy like his predecessor Diego Maradona did way back in 1986. However, Messi still has not won the Golden Foot trophy, which Ronaldo won in 2020.

Who is awarded the Golden Foot?

This trophy is only awarded to a player who is at least 28 years of age and is still playing. A panel of international journalists chooses ten nominees out of the soccer players who meet the above criteria. Out of those ten players, the winner is selected by an online poll where anyone can vote. The winner of the award then proceeds to leave his footprints on ‘The Champions Promenade’, on the seafront of the Principality of Monaco.

Poland striker Robert Lewandowski won the 2022 Golden Foot Award in Monaco on Wednesday. The winner leaves a mould of his footprints on “The Champions Promenade” 👇 pic.twitter.com/MWdECa1MLi

Since 2009, a charity auction has continued during the Golden Foot award ceremony, which aims to raise funds for fighting AIDS.

How many times has Cristiano Ronaldo won the Golden Foot?

Although, a list made on the basis of the nationality of the winners of the awards shows that Italy has produced the most winners. Italy has four players who have won the award, with Brazil coming in second with three winners.

Lionel #Messi is one of the 30 candidates for the #GoldenFoot Award. Vote for your Champions on: https://t.co/leWbjezNYF and win the opportunity to be involved in the ceremony in Monte Carlo @PSG_English pic.twitter.com/VhWR0q7s1A

However, 2022 has been an extraordinary year for Lionel Messi. Messi won the Ligue 1 and the Trophee des Champions with his club Paris Saint-Germain. Messi also won the Finalissima trophy with Argentina and ended the year with the World Cup title. Therefore, it would not be wrong to think that Messi might win the Golden Foot 2023 award.