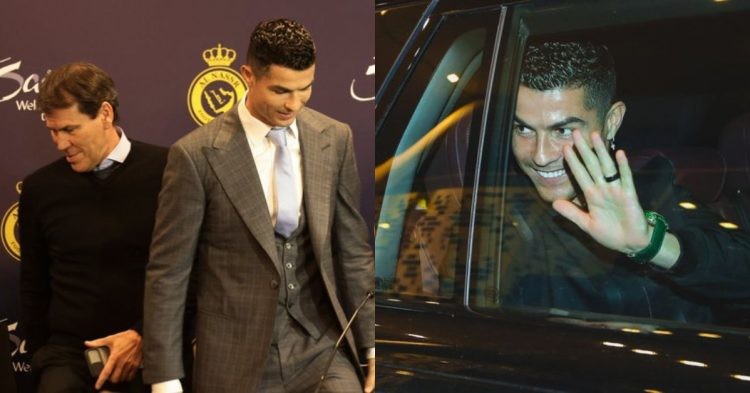 On November 22, 2022, Manchester United terminated Cristiano Ronaldo’s contract with immediate effect. The 37-year-old had been without a club for close to 40 days. He subsequently put pen to paper on a $214 million-a-year (200 million euros) contract with the Saudi Arabian club Al-Nassr. The soccer legend completed his move by flying out to Riyadh on Monday.

After undergoing his medical the next morning, the former Manchester United man was greeted by thousands of fans at Al-Nassr’s Mrsool Park stadium. After being officially unveiled as an Al-Nassr player, however, Ronaldo made a silly error during his first press conference.

The five-time Ballon d’Or winner mistakenly subbed “Saudi Arabia” for “South Africa” during the press conference. “For me, it is not the end of my career to come to South Africa,” the former Real Madrid talisman said. “I really don’t worry about what people say. I took my decision and I have a responsibility to change that, but for me, I’m really, really happy to be here,” he added.

The ex-Juventus forward also famously said the following during the press conference: “In Europe, my work is done. I am happy to be here. Nobody knows this, but I had many opportunities in Europe, Brazil, Australia, America, and Portugal; many clubs tried to sign me. I gave my word to this club.”

The global soccer star clearly had the misfortune of having had his tongue slip in the moment. However, what followed the press conference was a series of laughs being enjoyed by fans online at Ronaldo’s expense.

Cristiano Ronaldo has often been praised for being reasonably fluent in English, despite it not being his native language. However, fumbles by players, coaches, or really anybody, is thoroughly enjoyed by fans online. This incident was no different as trolls and memes poured in. In this video uploaded by SPORTbible, Ronaldo can be seen swapping the Asian country with the 2010 World Cup hosts.

What happened to Cristiano Columbus mann, times have changed sadly 😢

He doesn’t even know where he is😭😭😭

See you at Naturena my goat. pic.twitter.com/NlzyFzrTsT

Most of the comments were jokingly highlighting Cristiano Ronaldo’s poor knowledge of Geography.

“My idol is bad even at Geography now… he is truly finished,” wrote one user, while another commented. “What happened to Cristiano Columbus man, times have changed sadly.” Other comments centered around the theme of “Ronaldo doesn’t even know where he is.”

What started as the slip of Ronaldo’s tongue soon jokingly turned into an apparent “hint” as some fans wasted no time in linking the soccer legend to South Africa. One fan wrote, “See you at Naturena my goat.” This was a reference to the South African soccer club Kaizer Chiefs.

Mr. Champions League has now officially signed for Al-Nassr and said that he is ready to play straight away. With a vision to transform soccer in Saudi Arabia, Cristiano Ronaldo will be hoping to hit the ground running in the Saudi league.