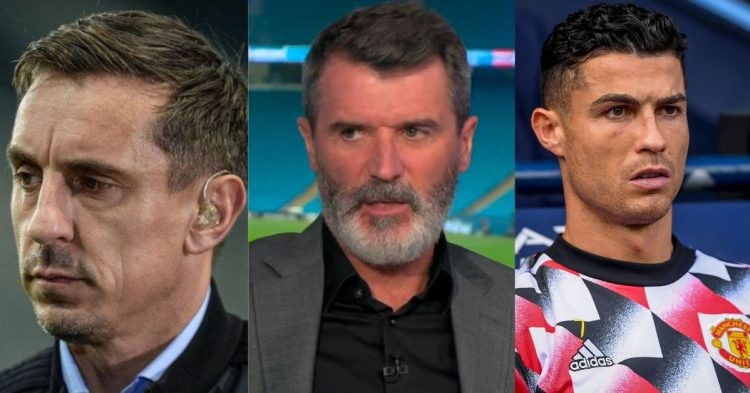 As we all know, Cristiano Ronaldo has been making the headlines since day one at Manchester United. A series of events unfolding on and off the pitch isn’t helping Manchester United in the transition phase.

Meanwhile, Cristiano Ronaldo is still the most important problem to solve, which hasn’t been dealt with till now. His attitude and behavior have already created a lot of speculation regarding the club and the striker as well.

After the series of events that have occurred in recent times, many pundits have their own ideas to share. Some are in favor of the striker, while others think he has to learn some manners and show some respect to his club.

A lot has been happening for Manchester United these days, on and off the pitch. We saw Cristiano Ronaldo walking down the tunnel before the final whistle at Old Trafford.

He previously left the field before the final whistle in a pre-season friendly against Rayo Vallecano. Cristiano Ronaldo was punished for his abysmal behavior shown towards the club.

He was fined two weeks’ wages and wasn’t included in the squad to face their London rivals, Chelsea. Subsequently, United drew 1-1 at home against a Chelsea side who weren’t at their best at Old Trafford.

The fate of Cristiano Ronaldo’s future is in the hands of Manchester United’s boss, Erik Ten Hag. He will decide whether the striker will stay or have to go. There has been speculation that the 37-year-old will leave on a free transfer this summer.

Gary Neville and Roy Keane, both former Manchester United players, have clashed with each other in this debate. He thinks that Manchester United should let go of Ronaldo and move on. Meanwhile, Roy Keane is in full support of the striker and says, “many players have done a lot of worse things; at least he is not a bluffer.”

Gary Neville, the former Manchester United veteran, in an interview said, “The only thing the club and Ronaldo can do is get together in this next week or so and end the relationship”

Gary Neville on Cristiano Ronaldo: “He's coming to the end of his career and Manchester United are a better team without him. He's just got to get used to it or leave." pic.twitter.com/3iWCZLbF13

Furthermore, he added, “End it this week or create a truce to get to the World Cup and then end it. Because this has to end. There aren’t many Manchester United fans who would now have Ronaldo in their starting eleven.

They are better without him – they score more goals without him, and they win more points without him. Manchester United are a better team without him. For me, Erik ten Hag had no other option. That’s the second time Ronaldo has left Old Trafford before his team-mates have got into the changing room. That is unacceptable.

Erik ten Hag knows that, so I think the only thing the club and Ronaldo can do is get together in this next week or so and end the relationship.

Cristiano is too good a player, too fantastic a character and the club have got to move on. Ronaldo can’t accept not being the star man in Manchester United’s team so he’s going to have to leave – that’s it.”

Roy Keane came to the support of Cristiano Ronaldo by defending him in this debate. He elucidates that many players, in their times at several clubs, have done a lot worse things.

Roy Keane replied, “I’m trying to see this from the player’s point of view – he’s obviously had enough. He’s lost his head. That has been brewing over the last few weeks.

"He feels [Ronaldo] frustrated he's not been getting opportunities and he's had enough. He's walked down the tunnel, players have done a lot worse at Manchester United. I think it happens, it's human nature."

I’m going to try and defend him. He’s a human being and has got flaws, feeling frustrated that he’s not getting opportunities and he’s had enough. He walked down the tunnel, but players have done worse things at Manchester United – it happens, it’s human nature.

Everyone was saying after the Spurs game it was Manchester United’s best performance in years. Absolute rubbish. Spurs were terrible. Ronaldo got a hat-trick when United beat Spurs last season at home, so he’s more than capable of getting on the pitch and making a difference.”

Fans React to Cristiano Ronaldo and his Future at Manchester United

Fans have once again reacted neutrally in this debate. Some want the striker to stay, while others want him to leave as soon as possible.

Cristiano Ronaldo is back with Man United first team. He has returned to training with the 1st squad today in preparation for Thursday’s game against Sheriff. 🚨🇵🇹 #MUFC

Erik ten Hag and Ronaldo have been in constant dialogue — Cristiano’s now in contention for next game. pic.twitter.com/Wmgp2lFTqk

A fan reacted, “Man Utd can’t let Ronaldo go unless they buy two strikers. Marcus Rashford isn’t a no9 and Anthony Martial is made of glass. Ronaldo is our only striker. “

A second one said, “Ronaldo is a world-class player with a proven record, but he is not happy, and I really don’t think he wants to be at Man Utd, so why keep him there to bring the dressing room down? Get rid of him and focus on what we have.”

Another added, “I would keep him, look at what he did last season. Poor management from Erik ten Hag – I agree with Roy Keane’s comments.”

The last one concluded, “Get him out. He slows the play down he creates nothing and is clearly a toxic cloud over the squad. His best years are behind him and it’s time he goes somewhere where you don’t need to play well to win trophies.”

Manchester United next welcome FC Sheriff to Old Trafford on Thursday for a match in the Europa League. Subsequently, following a home match against West Ham United in the Premier League on Sunday.