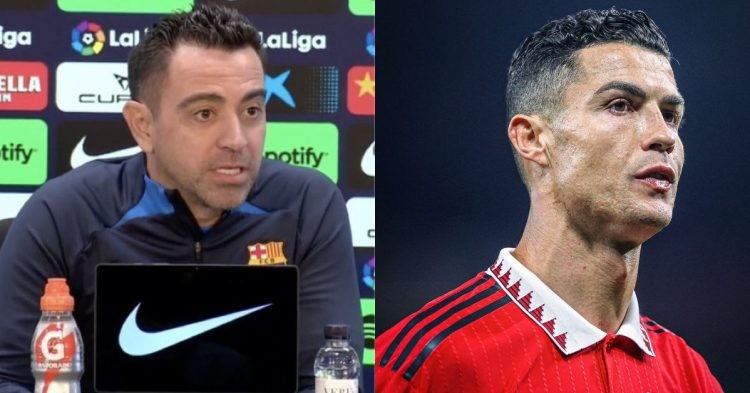 Cristiano Ronaldo will return to Spain as Manchester United will face FC Barcelona in the play-off round of the Europa League. After poor group stages, the two European heavyweights will square off in February in an effort to advance to the round of 16.

United needed to defeat Sociedad by at least two goals in their last group match in order to finish above the La Liga team, but they could only manage a 1-0 victory.

The La Liga team faced Viktoria Plzen, Bayern Munich, and Inter Milan but was eliminated from Europe’s top tournament after finishing third in the group with seven points.

Frenkie de Jong, who was a widely coveted summer transfer target for United supporters, could intriguingly be seen playing at Old Trafford even though he will still be wearing a Barca uniform.

The teams last faced off in the Champions League quarterfinals in 2019, but a lot has happened since then. In addition to Barcelona losing Lionel Messi and United bringing back Ronaldo, both teams have changed numerous managers.

Cristiano Ronaldo is once again the focus of all the headlines because he is returning to Spain. After a number of thrilling games in the “El Classico” rivalry, Ronaldo will seek revenge against Spanish rivals FC Barcelona.

How frequently have we witnessed Cristiano Ronaldo’s brilliance at Camp Nou? Xavi is fully aware of the Portuguese striker’s capacity to turn a game on his own.

Xavi and Cristiano Ronaldo have squared off against one another countless times in “El Classico,” the traditional football rivalry.

Xavi said in an interview, “It is the most difficult opponent once again. But we will look forward to it. They are a historic side; they have grown a lot with the arrival of Ten Hag; they have great players. It’s the worst draw we could have gotten. Once again, no luck.”

Xavi on Cristiano Ronaldo vs Barça in #UEL: “He seems to me to be a great player, he has marked an era in world football and can still make the difference”. 🔴🔵 #FCB pic.twitter.com/hGPkfhY3Ny

Finally, he concluded, “He seems to me to be a great player; he has marked an era in world football and can still make the difference.”

In the playoff game, Ronaldo will be the center of attention as he attempts to once again disarm his Spanish adversaries. The Spanish crowd would want to see the Portuguese striker return with a bang.

United and Barcelona have a long history dating back to their European Cup encounters in 1984. Eventually, their most recent matchup was in the 2019 Champions League quarterfinals.

In a thrilling 3-3 draw in September 1998 at Old Trafford, Xavi made his Champions League debut under Louis van Gaal. Last year, he returned to his childhood team to succeed Ronald Koeman as manager.

A fan commented, “Prime Ronaldo will come back against Barcelona after the World Cup.”

A second said, “Cristiano Ronaldo has committed more fouls (7) than he has shots on target (6) in the Premier League this season.” “Why is Xavi scared of him?”

Another added, “I can’t be the only Manchester United fan that’s happy about getting Barcelona.” “We finally get our revenge, and Barcelona are actually finished.”

The last one concluded, “Xavi just wants to give him respect instead of negative comments like he used to make about him.”

FC Barcelona will face Manchester United after the World Cup in February. Ronaldo will attempt to silence Camp Nou once more with his entrancing performance.