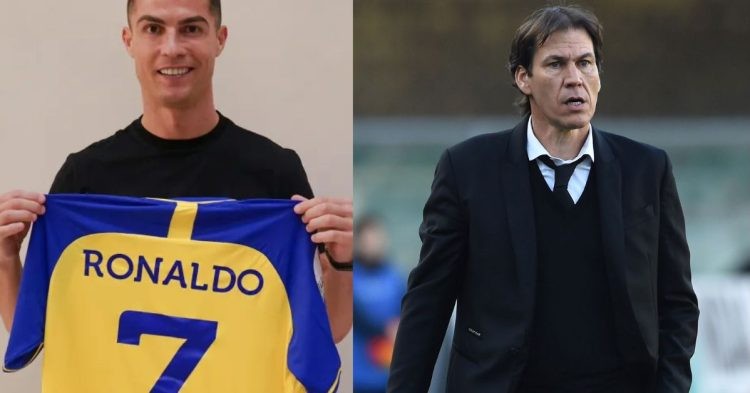 Cristiano Ronaldo has not enjoyed a dream start to his journey with Al-Nassr. Ronaldo recently joined the Al-Nassr in a mega deal that would see him earn $200 million annually. However, Al-Nassr’s coach Rudi Garcia cracked a rather insensitive joke which involved Lionel Messi after Ronaldo joined the club.

After the club announced the signing of the Portuguese legend Cristiano Ronaldo, coach Rudi Garcia attended a press conference. Rudi gave a rather hilarious answer while confirming Ronaldo’s signing. Rudi said, “First, I wanted to bring Messi from Doha. I tried to bring Messi directly from Doha.”

Al Nassr coach, Rudi Garcia, asked about Ronaldo before the official announcement: “I wanted to bring Messi from Doha.”

Although Rudi Garcia might have meant this as a joke, many have not taken kindly to this statement. Fans believe that Rudi’s statement came off as an insult to Cristiano Ronaldo.

It is a well-known fact that Lionel Messi is the arch-rival of Ronaldo. The two GOATs of soccer have been battling it out at soccer’s highest stage for over 15 years. While Messi still seems to be at the top of his game, the 37-year-old Portuguese star is surely reaching the end of his career.

Although Ronaldo has previously reiterated his desire of finishing his career at the top, this is certainly not the case now. After Ronaldo’s Manchester United exit, his agent, Jorge Mendes, offered him to several clubs in Europe but none seemed to be interested in signing the all-time top-scorer in the Champions League. Thus, even after initially denying Al-Nassr’s rumors, Ronaldo ultimately decided to sign with the Saudi-based club.

Who is Al-Nassr’s coach, Rudi Garcia?

While Rudi Garcia might have cracked a joke at Cristiano Ronaldo’s expense, the French coach would definitely be glad to have Ronaldo on his side. Rudi’s side, Al-Nassr, is currently at the top of the table in the Saudi Pro League with 26 points. Meanwhile, Al-Shabab is in the second position with 25 points, albeit, with a game in hand. The addition of a veteran star like Ronaldo would be a huge boost for Al-Nassr.

Rudi Garcia was appointed as the head coach of Al-Nassr in June 2022. Rudi has previously coached clubs such as Lille, Roma, Marseille, and Lyon. The highlight of Rudi’s coaching career came in the 2019-20 Champions League campaign when he was managing the French club, Lyon.

Rudi led Lyon to the semifinals of the tournament after defeating Pep Guardiola’s Manchester City in the quarterfinals. Lyon, however, lost in the semifinals to Bayern Munich, the eventual champions that season.