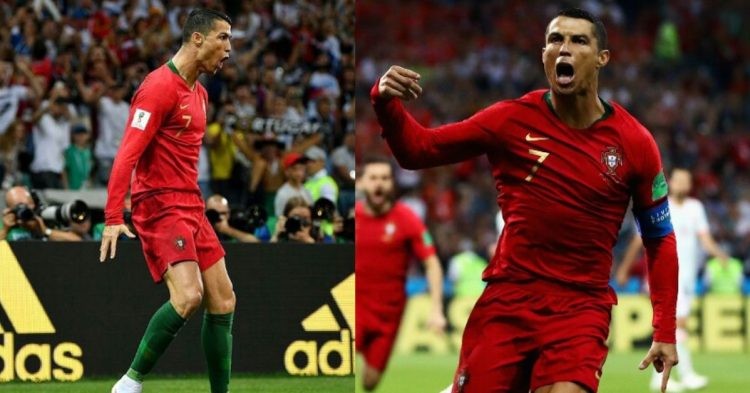 At the Fisht Olympic Stadium in Sochi, Cristiano Ronaldo made history by becoming the first player to score in eight straight major international competitions.

Portugal was playing against Spain in their opening match of the 2018 FIFA World Cup. Ronaldo in the match won and converted a penalty in the fourth minute.

Ronaldo joined Uwe Seeler, Pele, and Miroslav Klose as the fourth player to score in four World Cups as a result of the goal.

After Diego Costa had tied the game for Spain just before the break, Ronaldo scored again to put Portugal in front.

It appeared as though Portugal would begin their 2018 World Cup campaign with a loss when they gave up two goals in the second half.

However, Ronaldo had different plans and curled in a late freekick to give Portugal a point. Cristiano Ronaldo owned the whole backline of Spain that day, especially Gerard Pique.

The greatest individual performance in the history of world cup 🔥🐐🐐

One of the greatest games of all time

Fans react as they recall the sensational performance portrayed by Cristiano Ronaldo at the FIFA World Cup 2018.

A fan commented, “Hat-trick against the mighty Spain. This lad is the best in the world.”

Another one added, “ I hope Ronaldo goes crazy this World Cup. That hat trick in 2018 against Spain was legendary.”

Ronaldo has scored 7 goals in 17 world cup matches including a hat-trick against Spain in 2018#Portugal#FIFAWorldCup pic.twitter.com/xUcHNPdo0d

A third added, “My best memory of Ronaldo was in 2018 when he sealed his hat trick against Spain with this sublime free-kick.”

The last one concluded, “There’s only one great player alive. Ronaldo did the impossible against Spain in 2018! De Gea was the best goal keeper in the world at the time but Ronaldo scored a hat trick.”

How many goals has Cristiano Ronaldo scored in his World Cup appearances?

Cristiano Ronaldo has scored eight goals in eighteen matches for Portugal at the World Cup. His eighth goal came yesterday against Ghana after Ronaldo won and converted a penalty against Ghana in the 65th minute of the match.

At the Qatar World Cup 2022, Ronaldo only needs two more goals to surpass the legendary Eusebio. Eusebio holds the record for most World Cup goals for Portugal with nine goals.

A historic moment for a legendary player 👏#FIFAWorldCup | @Cristiano pic.twitter.com/YbpOoQHgPP

Since his debut at the quadrennial event in 2006, the Portuguese talisman has participated in every edition.

He is the only player in World Cup history to score in five different editions, and he is now competing in his fifth World Cup in Qatar.