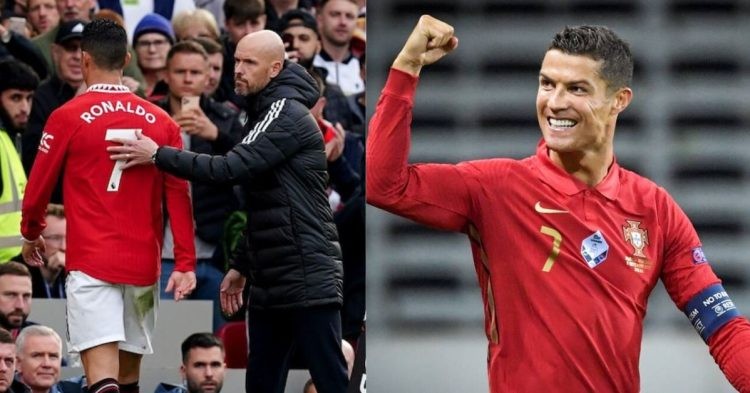 Cristiano Ronaldo has just been offered the most lucrative deal in the history of football! Just a week ago, Cristiano Ronaldo’s contract with Manchester United was terminated following his infamous interview with Piers Morgan. Ronaldo was without a club only for seven days when the Saudi club Al-Nassr offered the Portuguese striker a contract.

Al-Nassr’s contract would see Ronaldo earn a whopping 200 million dollars per season, which could see him being the highest-paid player in the world.

According to the Spanish newspaper Marca, Cristiano Ronaldo is going to put pen to the paper about Al-Nassr’s deal. As per the sources, Ronaldo finds the deal to be “appealing”. The five-time-Ballon D’or winner left his former club Manchester United just a week ago. Things turned sour between Ronaldo and the club at the very beginning of the season.

But… big part is sponsor deals, so it’s not clear yet if image rights can be agreed.

Ronaldo fell out with the club’s coach Erik ten Haag over his role in the squad. The Dutch coach rarely started Ronaldo during the games and rather used him as a squad player. The dispute  became public after Ronaldo’s interview with Piers Morgan became viral on the internet.

However, neither Cristiano Ronaldo nor Jorge Mendes (his agent) has officially commented about the Al-Nassr deal as he is fully focussed on the ongoing world cup. Nevertheless, Al-Nassr is optimistic that Ronaldo will agree to join the club for 2 years, that is till 2025.

If Ronaldo signs the contract, Ronaldo would be the first footballer to become a billionaire. The former Real Madrid talisman had previously rejected another lucrative offer from a Saudi Arabian club. However, the 37-year-old striker is almost at the twilight of his career.

Even though Ronaldo had said that he wouldn’t join any club after being lured by the money involved, such a deal is certainly hard to turn down. Even for a footballer as great as Cristiano Ronaldo.

Where is Al-Nassr FC from?

Al-Nassr FC is one of the most successful Saudi Arabian clubs. The club has won the Saudi league nine times, and in 1998, they won the Asian Cup Winners’ Cup and the Asian Super Cup. Their current head coach is Rudi Garcia, who has previously managed teams like Marseille, Roma, Lille, Lyon, and so on. Vincent Aboubakar, the captain of the Cameroon National team, plays for Al-Nassr.

Al-Nassr was the first team to officially represent Asia in an international tournament when they played in the FIFA Club World Cup in the year 2000.