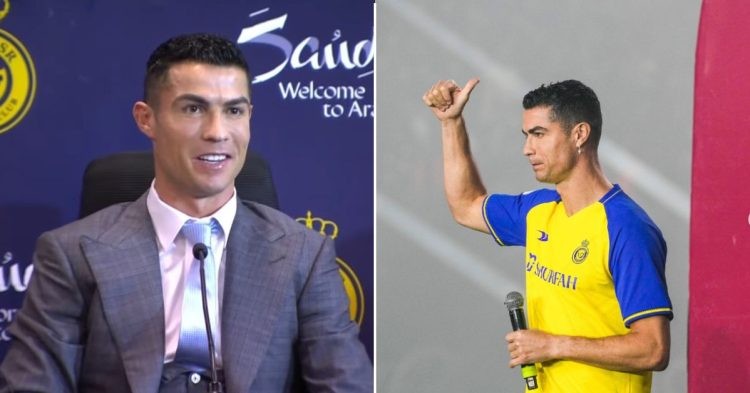 Cristiano Ronaldo is an athlete of superstar status and has been for more than a decade now. When he makes a move to another club, it will be talked about for weeks by the soccer world. It hasn’t been any different this time around as well. Ronaldo‘s name has been floating on the internet with every bit of information about his new club, Al-Nassr coming to light as well.

The 5x Ballon d’Or winner moved to Riyadh, Saudi Arabia at the end of 2022 after terminating his contract with Manchester United a few weeks prior. The move came as a surprise to many, as the majority of soccer fans have criticized him for choosing the money. Speaking of the monetary reward Ronaldo will receive from the Saudi Arabian giants, his contract has been talked about by millions in recent times.

How much is Cristiano Ronaldo’s Al-Nassr contract worth?

Ronaldo signed a huge contract with his new club recently. According to various sources, the Portuguese legend will receive about $214 million per year. There have been reports of add-ons being included in the figure as well. This was certainly brought up by the interviewer when Ronaldo sat for his first-ever press conference in Riyadh. The interviewer asked for his thoughts about the response from the soccer fans.

CR7 replied, “I’m a unique player, so it’s good coming here… I beat all the records there so I want to beat a few records here as well. For me, it’s a good chance. As you say this contract is unique, because I’m a unique player as well.”

It isn’t surprising to see that Ronaldo’s self-confidence hasn’t faded one bit. Despite what his haters may claim, the new Al-Nassr no.7 still believes he can perform at a high level. This comes after shouts of Ronaldo being too old and “finished” as well. He truly believes that he can make more records his own in the Saudi Pro League.

Together with his elite mentality, Ronaldo’s influence on the sport’s lovers hasn’t changed as well. After being presented as an Al-Nassr player, the 37-year-old took part in a training session with his new teammates. Claiming that the crowd went mayhem every time he touched the ball during one of the team’s drills would surely be an understatement.

Ronaldo has played in various countries, including the Premier League, La Liga, Serie A, and now the Saudi Pro League. As he claimed, the former Man Utd striker broke records everywhere he went. And it certainly looks like he’s aiming to achieve that in Riyadh as well. It would surely be interesting for the soccer world to witness how one of soccer’s GOATs performs.