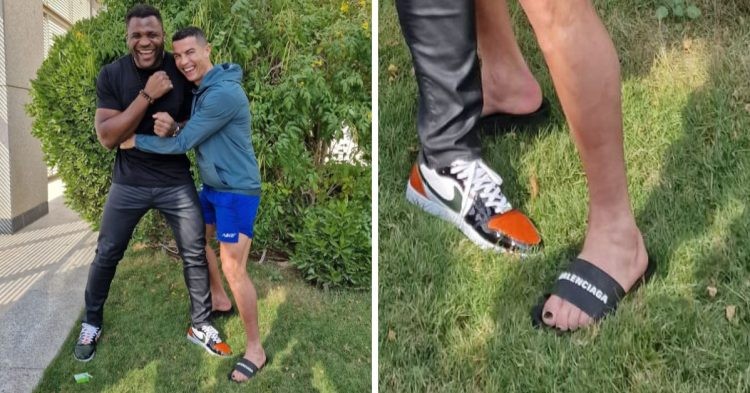 Cristiano Ronaldo has been embroiled in another controversy after pictures emerged of him with Francis Ngannou, the UFC Heavyweight Champion of the world, wearing a pair of Balenciaga flip-flops. The two were seen laughing and posing in the picture.

Balenciaga, a high-end fashion label, has encountered considerable criticism in the wake of its latest advertisement campaign that supposedly included child p*rnography. The advertisement depicted two young girls grasping teddy bears in their hands. The issue, however, was that the stuffed animals were wearing bondage apparel.

In 2008, a US court ruling confirmed the legality of federal statutes related to virtual child p*rn. Balenciaga has since been subject to a lot of criticism for their ad that depicted such a sensitive topic in a poor manner. People have expressed their intense feelings about this advertising campaign on social media websites such as Twitter.

Just reminding everyone that Balenciaga had a whole ad campaign with several nods to pedophilia and many of your favorite celebrities are continuing to work with them.

Despite the removal of the photos from their Instagram account and an apology, the images have become widely circulated online. It definitely generated some surprise when Ronaldo was spotted wearing a Balenciaga flip-flop, even though there have been appeals to boycott the company’s products.

Cristiano Ronaldo is one of the world’s most famous athletes. He has a long list of accomplishments, including five Ballon d’Or awards, the highest honor in the sport of soccer. He is also a global ambassador for many causes, including youth development and humanitarian aid.

Balenciaga has been suffering repercussions since the release of a controversial advertisement seen as inappropriately sexualizing young people. The luxury label apologized in response but has yet to fully recover from the incident. Kim Kardashian is a famous and powerful figure in the public eye, though her actions are often met with debate. She is known for stirring up debate and being a subject of discussion.

Kim Kardashian has landed herself in hot water due to her recent remarks regarding the Balenciaga scandal. As an ambassador for the fashion label, the American celeb had something to say about the controversy that has gone viral. Kim said, “As a mother of four, I have been shaken by the disturbing images.”

She mentioned that she has used the last few days to attempt to contact the label in order to figure out why this took place. When asked about her relationship with the brand in the future, she declared that she is re-examining her association with Balenciaga. This declaration has not been well-received by netizens.