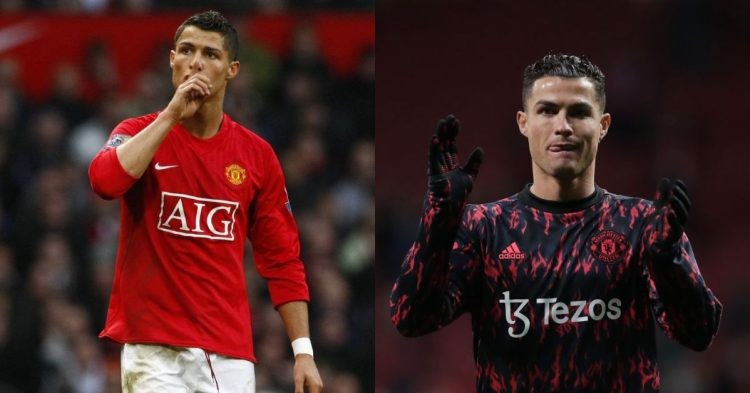 Cristiano Ronaldo has caught the entire soccer world off guard with his recent comments. He claimed that Manchester United and its officials betrayed him when they forced him to leave the club last year and this summer. However, this hasn’t been the first time that Ronaldo has publicly attacked the club.

As we all know, Ronaldo joined Man Utd for the first time in 2003. It was a fairy tale move for the player when he managed to impress Sir Alex Ferguson during a friendly. He won everything there was to be won in the sport. Ronaldo helped United win 3 Premier League titles and a UEFA Champions League title in 2008, among many other honorable trophies.

In 2008, CR7 surprised many with his comments. He publicly agreed with Sepp Blatter, who was the FIFA president at the time.

In 2008, the Portuguese striker had made his intention clear: he wanted to play for Real Madrid in Spain. However, United was keen on keeping him. He was Sir Alex’s best player on the team, he managed to score 30/40 goals per season. And it seems like the United board did not want to lose a player of that caliber. Ronaldo on the other hand was unhappy with this decision.

He publicly revealed his intention to move to Madrid that year. This attracted the attention of Sepp Blatter, who was an honorary member of Real Madrid’s board, and FIFA president as well. When speaking about Cristiano’s situation, Blatter mentioned that there was “too much slavery in modern football”. The media connected the dots to Ronaldo and asked him about the comments.

The 2008 Ballon d’Or winner said, “I agree with what he said. It’s true. I agree with what the president of FIFA said. I know what I want and what I would like. We have to see what happens. I do not know where I will begin next season.”

Ronaldo’s comments from years ago suggested that United kept him against his wish. It was his dream to move to Madrid to play for the club. However, the Red Devils kept him for one more year. The team managed to win the English Premier League title that time around in 2009 and also made the UCL final. However, they lost to Real Madrid’s arch-rivals, Barcelona in the finals.

14 years later, Ronaldo slammed the club once again. He has said that he does not respect United manager Erik ten Hag as well. This has caused the Dutch coach to decide that United would have to let the 5x Ballon d’Or winner go.

If Cristiano Ronaldo is kicked out of the United team, it would not have been the fairytale ending that fans would have wanted. After all, he was their top scorer last season and helped the team win many games with his last-minute goals. If Man Utd were to kick him out, they would have to find a proper replacement for the Portuguese star.
Tags: Cristiano RonaldoManchester UnitedReal Madrid
Previous Post