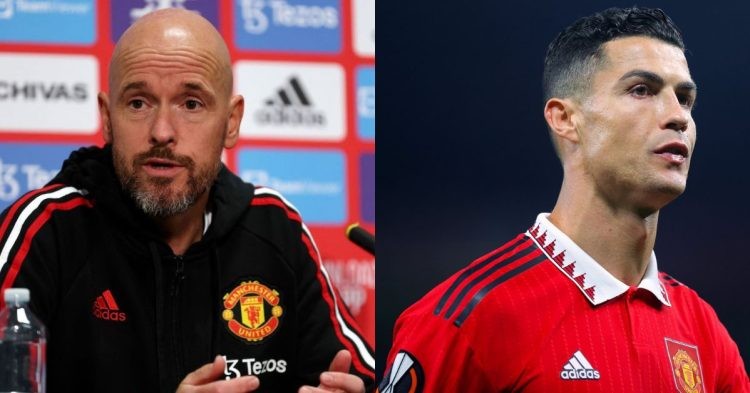 No one would have imagined that one of the best players in the world, Cristiano Ronaldo, would not be a part of a certain team. We never thought he would struggle this much to get into the starting lineup.

The Portuguese striker is under immense pressure as his fate is in someone else’s hands. Yeah, you heard right, because Erik Ten Hag on Tuesday will decide the fate of the striker.

Manchester United on Saturday dropped points against their London rivals, Chelsea, as they were held 1-1 at home. Both teams just couldn’t bring their best game to the pitch.

However, Manchester United looked likely to score and take away 3 points, but they couldn’t. United were on the front-foot as they came up with a compelling win against Tottenham Hotspur at home, but couldn’t keep up with Chelsea’s defense.

Cristiano Ronaldo is once again the negative figure for Manchester United

Cristiano Ronaldo since this summer transfer window has been the negative aspect in the transition phase for Manchester United. According to some English pundits, he is the major hindrance to Manchester United’s growth prospectus.

Cristiano Ronaldo went down the tunnel at Old Trafford before final whistle. 🚨🔴 #MUFC

Erik ten Hag: “I will deal with that tomorrow, not today. We are now celebrating this victory”. pic.twitter.com/Ll4raQovL8

First, he wanted to leave, but couldn’t as not a single club in Europe was interested in signing him. Second, his attitude and behavior from the start has been a matter of concern for the Man United boss, Erik ten Hag.

Subsequently, he was punished by Erik Ten Hag for his abysmal behavior towards his boss and towards the club. He wasn’t included in the squad and was absent in the 1-1 draw against Chelsea.

The Portuguese striker might have to wait to learn his fate, with the immense pressure of showdown talks coming this week with Erik Ten Hag.

It has been said that he was also fined two weeks’ wages as he refused to come off the bench for the match against Tottenham Hotspur. Erik Ten Hag on Tuesday will decide the fate of the Portugal international.

"There has to be consequences. It is important for the attitude and mentality of the group". pic.twitter.com/pExifE8LKW

Before reintegrating Ronaldo back into the squad, he wants the veteran to show some determination and good behavior. He looks for “genuine contrition” from the Manchester United striker all season.

This could be one of the most massive upsets in the history of football, if Ten Hag decides something negative, which will not be in favor of Cristiano Ronaldo.

Meanwhile, if he thinks that the striker can change himself and work with the team in harmony for its growth, then it will be good for him and his reputed career.

In the post-match interview, Ten Hag and Bruno were reluctant to say much about the Portuguese. They said we need to focus on the win and the next game rather than point out someone’s mistake.

Bruno said, “He’s valuable to us. We need him, that’s clear,” the manager said of Ronaldo after the Chelsea game. “And I think you see it also in this game; he can finish. That’s quite obvious. I think I have said enough about the situation. Let’s focus on this game. It was a good game for my team. I have to really compliment my team.”

Erik ten Hag on Man Utd signing new striker in January: "I count on Cristiano Ronaldo, so in this moment it is not an item". 🔴 #MUFC

There has been speculation that the 37-year-old could leave Manchester United on a free transfer in the January transfer window. Erik Ten Hag has a huge decision to make, as his decision could cause a lot of debate and allegations in the future.

Manchester United welcome FC Sheriff at home in the Europa League on Friday, and now it is on Ten Hag if he includes Ronaldo in the squad or not.