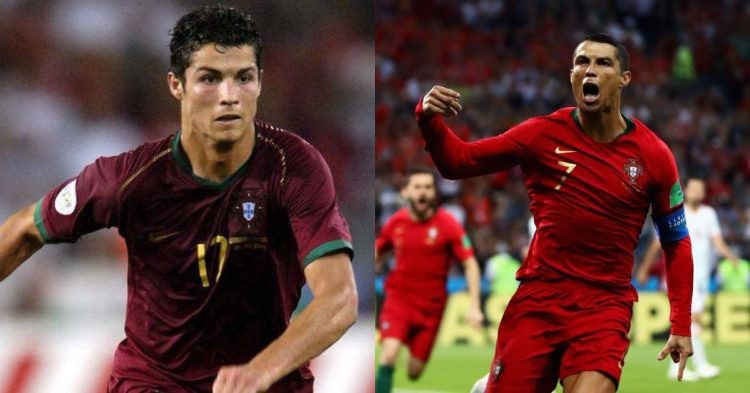 It is no secret that Cristiano Ronaldo is arguably the greatest soccer player of all time. Along with Lionel Messi, Ronaldo has changed the definition of the beautiful game as we all know. The former Real Madrid star has won countless accolades, both individually and with his teams. His major trophies include 5 UEFA Champions League trophies, 5x Ballons d’Or, 1 European Championship with Portugal, and many others.

The biggest trophy that is missing from his cabinet is the prestigious World Cup trophy. The golden trophy is something that Ronaldo has been looking to get his hands on for almost two decades now. Despite the fact he has never won it, the Manchester United star has performed exceptionally in the FIFA World Cup tournaments. As we near the FIFA World Cup 2022, Ronaldo edges closer to another record in his illustrious career.

How many FIFA World Cup goals does Cristiano Ronaldo have in his career?

Ronaldo will play in the FIFA World Cup this year for the 5th time. Other than the Portuguese star, only Antonio Carbajal, Rafael Márquez, and Lothar Matthäus have managed to do the same. Similarly, Ronaldo will enter an elite club if he scores in this year’s tournament. Currently, Pele, Miroslav Klose, and Uwe Seeler have the record for scoring in the most FIFA World Cups: 4.

If Cristiano Ronaldo scores at the World Cup in Qatar, he will become the first player to score at five World Cups! 🐐 pic.twitter.com/e6VEHVpDPC

If Ronaldo manages to find the back of the net for Portugal later this year, he will become the first player to score at 5 World Cups. Now that will be a record that CR7 will be looking to chase. One might rule him out to score considering the slow form he has been in for Manchester United this season. However, considering his elite mentality to always keep winning no matter what, we can never rule Ronaldo out.

According to Transfermarkt, the 37-year-old has 117 goals for Portugal in 191 games played. He’s the leading goal-scorer in international soccer as of November 2022. In addition to that, Ronaldo has scored 7 goals in 17 FIFA World Cup appearances and has made 2 assists.

It’s fair to say that @Cristiano Ronaldo has reinvented himself throughout his career! ✨ @selecaoportugal 🇵🇹 pic.twitter.com/OePVaZJBdI

The number of goals he has at the World Cup might be low, but he is a man to step up for the big occasions. An example of that would be when he scored a sensational free-kick against Spain in the last few minutes of the 2018 World Cup.

Ronaldo’s first-ever World Cup was in 2006 when he managed his best finish at the tournament with his country after reaching the semifinals. Since then, Ronaldo has been on the search for the golden trophy.