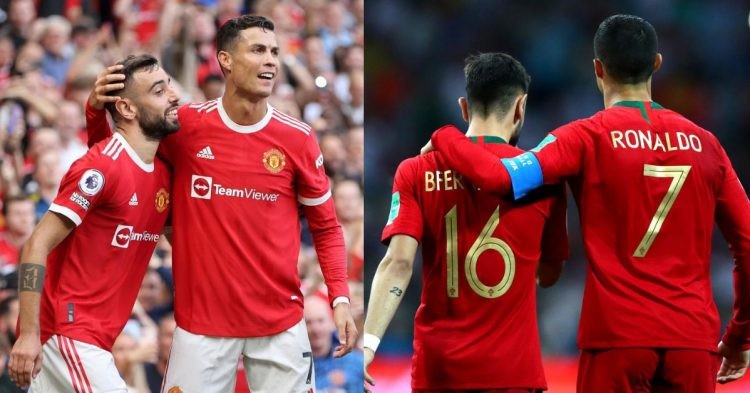 Cristiano Ronaldo has been fined $1.2 million by Manchester United for his explosive interview with Piers Morgan. There was huge speculation surrounding how the players and the manager of Manchester United would react to this interview. Erik ten Hag has been reported to be very furious with Ronaldo’s words. According to Kaveh Solhekol, even the players are infuriated with him, owing to this interview.

In an interview, Ben Foster said players would not be that fazed by what Ronaldo has said. A recent video has surfaced in which Bruno Fernandes has been seen meeting Ronaldo. The two have met up in Portugal’s camp ahead of the World Cup. The video has been taken out of context and gone viral over the past few hours.

The truth behind Bruno Fernandes’ awkward interaction with Cristiano Ronaldo

According to Laurie Whitell, the video of Bruno Fernandes meeting Ronaldo at the Portugal camp has been taken completely out of context. Furthermore, the interaction was a joke about Ronaldo’s flight arriving late. The filmed interaction was light-hearted and there was no animosity between Fernandes and Ronaldo.

🗞 Sources close to Bruno Fernandes insist that the filmed interaction between him and Cristiano Ronaldo was a joke about his flight from England arriving late and that the exchange has been taken out of context. [@PJBuckingham, @lauriewhitwell]

Diogo Dalot will also be meeting up with Ronaldo at Portugal’s camp ahead of the World Cup. The video mentioned was also put up by Sky Sports on their social media. Fans although, saw right through the video, and were unimpressed by the news outlet.

Ronaldo set to be fined $1.2 million for his explosive interview

Despite giving a highly controversial interview, it remains unlikely that Ronaldo is in breach of his contract. The Portuguese forward might be fined $1.2 million for his interview with Piers Morgan. In the few other snippets that have been released today, Ronaldo also accused the Glazer ownership of Manchester United of its downfall.

“The Glazers, they don’t care about the club.”

The Portuguese attacker said, “The owners of the club, Glazers don’t care. I mean professionally, sportingly. They don’t care. There are some things in the club that don’t help Man Utd to reach the top level. I never spoke to them, never!”.

Manchester United have also consulted lawyers to see what actions can be taken against Ronaldo as they weigh up their options in this saga. United is consequently looking to hand Ronaldo a punishment in the coming weeks.