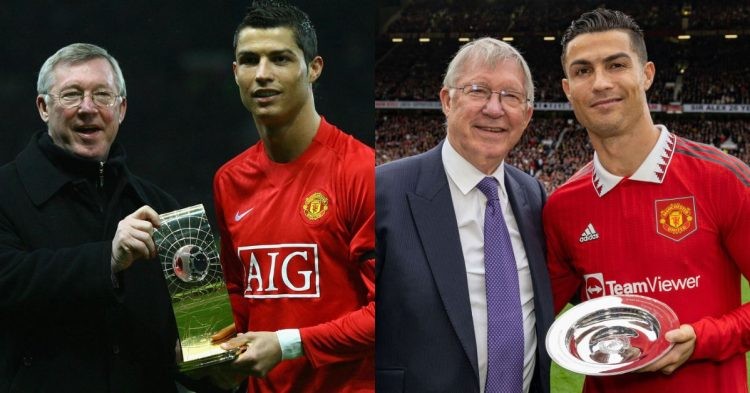 Cristiano Ronaldo and David de Gea were given awards by Sir Alex Ferguson before their Premier League match against Newcastle. Both were presented with a plate by their former manager in recognition of their landmark careers and services to the club.

Sir Alex and Ronaldo’s dynamic has been something the fans have loved over the years. Ferguson signed Ronaldo aged just 18 from Sporting CP in 2003. Ronaldo even referred to Ferguson as his ‘football father.’ Not a soccer father. They call it football on the other side.

Fans were reminded of the initial years of Ronaldo at the club. Cristiano scored 84 goals in 196 appearances for the club and even won his first Ballon d’Or while in Manchester. One fan commented, “This moment was so beautiful. I nearly cried when I saw it.”

Fans were nostalgic for Sir Alex and Ronaldo’s time together at United, when they dominated English Football. One commented, “Precious memories of you both, one of a kind the two of you are.”

Reactions flooded Twitter as well. The respect and admiration between the two are undeniable.

Sir Alex even brought David de Gea to the club. Along with Ronaldo, he is the only one who has won a Premier League at the club.

Fans reminisced about the time when Ronaldo first arrived in Manchester.

Why were de Gea and Ronaldo given awards by Sir Alex?

Cristiano Ronaldo achieved the 700-goal mark in his club career so far. According to FIFA, only Josef Bican (1957) has scored more so far.

Sir Alex also met with United manager Erik ten Hag. There have been some positive signs under the new manager but the results have been inconsistent. It would require a monumental effort from him to change United’s fortune and return them to the glory days of Sir Alex’s reign.

Islam Makhachev’s UFC Loss: Fighters Who Gave a Lot of Trouble to Makhachev