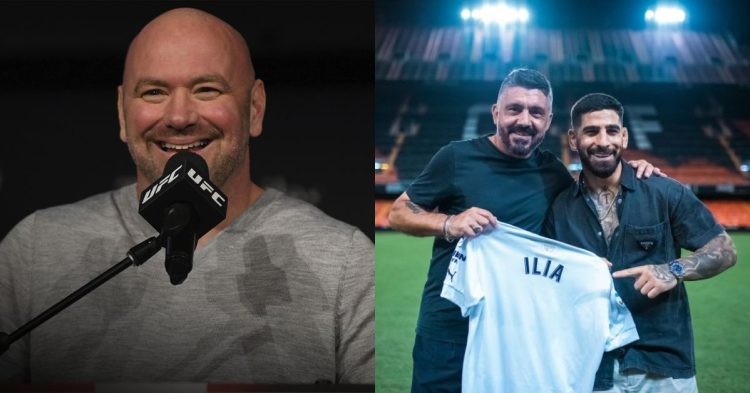 Soccer is one of the most-watched sports in the world. As we all know, the FIFA World Cup is also one of the biggest tournaments in the world. Many travel thousands of miles across the world to see their favorite soccer player kicking a ball. It seems like Dana White isn’t a huge fan of this.

A while ago, he claimed that soccer was the most boring sport on the planet. His decision to take a shot at the sport almost the whole world loves wasn’t well received by many fans.

On a podcast, Dana White said, “Can’t stand soccer, I think that it’s the least talented sport on earth. There’s a reason three-year-olds can play soccer ok? You run around and kick a ball.” When one of his friends claimed that White wouldn’t dare to say this in Brazil, a country where soccer is worshipped, Dana didn’t have any of that.

He said, “Dude I’d say this in every country. When you’re playing a game where the net is this big, right, and the score is 3-1, are you s**ting me right now? Do you know how untalented you have to be to score three points when the net is this big?”

There is a reason why the clip has gone viral now, even four years later. For context, UFC, the organization that Dana leads, recently signed a deal with La Liga. For those who don’t know, La Liga is Spain’s first-division league that includes the likes of legendary clubs like Real Madrid, Barcelona, and Atletico Madrid.

According to La Liga, the partnership’s purpose is a “Promotional partnership to engage with fans across both sports through social media collaborations, on-site coverage at events, digital content, athlete activations, and more.”

This has sparked a huge debate on Twitter, where fans are calling Dana a hypocrite for agreeing on a deal with La Liga.

I want to see him even juggle a ball

La Liga has a partnership with this guy btw.

La Liga after hearing this and knowing they have a partnership with UFC https://t.co/I8DMoBXdkn pic.twitter.com/Pmda5mXGrr

Didn’t the @UFC and @LaLiga recently sign a partnership deal???

Exactly the response expected from such a meat head

Soccer fans have all teamed up against Dana for his comments about the sport. Some have even claimed that he can’t even juggle a soccer ball. After all, billions love and watch the sport on a daily basis. Hence, the reaction to White’s hateful comments toward the sport isn’t surprising at all. What is unusual for fans is that his company, UFC, still decided to sign a promotional deal with a major soccer federation.