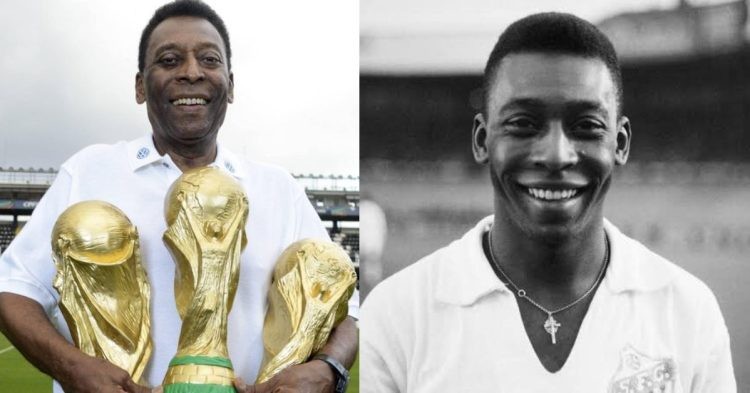 Pele, one of the biggest sporting icons of the 20th century, tragically passed away before the turn of the year. What followed, were claims on social media that FIFA had decided to honor the legend by displaying his feet in a museum. The claims have not been confirmed by the governing body for soccer. It turns out that the Brazilian legend, in his autobiography, had explained how he got strong legs, and in particular, strong knees.

Recalling his childhood, the three-time World Cup winner shed some light on his school years. While talking about his school, he reminisced about one of his disciplinarian teachers. The soccer legend then revealed his teacher’s inventive method of punishing students.

As a child in Brasil, Pele couldn’t pronounce the name of his favorite player, a goalkeeper named Bilé. He kept saying “Pilé” instead.

To make fun of him, kids in school would call him Pele.

His went on to become a football legend with one of the most famous names in the world. pic.twitter.com/sfyNh731gA

“I remember my first teacher well. Her name was Dona Cida. She brooked no argument and was a harsh disciplinarian. She wouldn’t stand for any misbehavior,” the Escape to Victory star said. “I was often punished by being made to kneel on a pile of dried beans, hard as little stones,” he added.

Pele’s anecdote helps form a picture of his first teacher in mind. One can imagine that Pele’s skill with the soccer ball was not enough to get him exempted from detention. The soccer legend, however, went on to credit his disciplinarian teacher for helping shape his legendary career.

How did punishment help strengthen Pelé’s knees and character?

Despite his misfortune with punishments aimed at reforming his academic side, Pele would find success outside the classroom. O Rei would go on to be called the greatest soccer player who ever lived. The Santos and New York Cosmos star would lift a record 3 FIFA World Cups with Brazil. But how did being on the receiving end of punishments in his formative years aid the soccer star?

“I was often punished by being made to kneel on a pile of dried beans, hard as little stones,” Pele revealed in his book. “Maybe that helped to strengthen my knees for the work they had ahead,” the late 82-year-old added. It seems that kneeling on a pile of dried, hard beans, strengthened Pele’s legs, and his knees in particular. The soccer legend subtly credited his teacher for strong knees in his book.

Sadly, Pele couldn’t show his talent in either of his prime World Cups. After scoring a goal when he dribbled past four players in 1962, he was injured taking a shot. Then, in 1966, filthy challenges by Bulgaria and Portugal took him out. He vowed not to play in a World Cup again pic.twitter.com/kZUJIaGHOt

Knees probably weren’t the only thing that developed strength over time. It also needs to be stressed that punishments were probably the reason for the development of Pele’s character. As a soccer player, the Brazilian had to go through quite a few hurdles. A case in point is Brazil’s third World Cup victory with Pele. O Rei had vowed not to play in another World Cup after the 1966 World Cup held in England.

In 1966, Pele became the subject of targeted tackling by players from multiple countries. Frustrated with the tackling, he vowed never to play again.

However, with his claims to greatness in doubt, he went back on the promise to play in the 1970 World Cup held in Mexico and won the tournament to add a third to his tally. This amply demonstrates the Brazilian’s character, which was arguably shaped due to punishments he received in school.