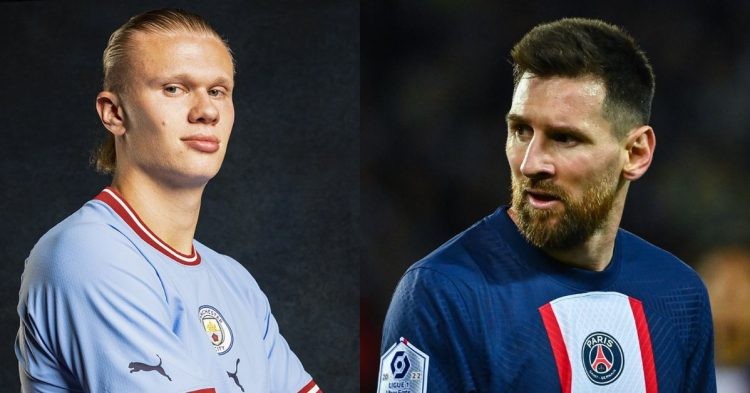 Football fans around the world have taken notice of flawless performance of Lionel Messi for Paris-Saint-Germain this season.

After another assist against Juventus in the Champions League, the 35-year-old attacker has surpassed Erling Haaland of Manchester City as the man who has contributed to the most goals this season.

📊 Lionel Messi and Erling Haaland have each contributed 25 goals for Manchester City & PSG.

The most by any player in Europe's top 5 leagues this season.

Messi left Barcelona in the summer of 2021 and joined Paris-Saint-Germain for free. He struggled to maintain consistency throughout his debut season with the French champions at Parc des Princes.

Meanwhile, Erling Haaland came to Manchester from German giants Borussia Dortmund this summer. Haaland has adapted to the Premier League with ease. He is set to create havoc In his debut season by smashing most of the records.

Both Haaland and Messi have been in scintillating form this season. Haaland has already scored three hat-tricks for Manchester City this season.

Meanwhile, Lionel Messi became Europe’s first player to achieve double digits in goals and assists. He has done it for the eighth time in his career.

In comparison to Haaland, who scored 22 goals and contributed three assists for Manchester City, Messi has assisted his teammates’ attackers 14 times this season while scoring 12 goals himself.

It's hard to believe that after Erling Haaland's ridiculous start to the season, 35-year-old Lionel Messi still has more goal contributions than him 🤯🐐 pic.twitter.com/6cCknL4ANd

Messi has contributed to PSG’s 26 goals this season, while Haaland has provided the Premier League champions with a total of 25 assists.

The 35-year-old Argentine forward provided the 39th assist of his Champions League career as he helped Kylian Mbappe score in PSG’s 2-1 victory over Juventus.

It almost seems unbelievable that Lionel Messi has contributed to as many goals as the much-discussed Erling Haaland. But then again, it’s Messi.

What a season he is having! 🔥👏 pic.twitter.com/Slrl4rAJAY

A second added, “It’s obvious cos the G.O.A.T not only scores but also a playmaker as well. All Haaland does is to score goals.”

Another one elucidated, “And he plays in man city BTW, a team where almost anyone can perform. I am sure he wouldn’t have performed the same if he was let’s say Chelsea, Manchester united or even arsenal.”

We could witness Messi at his peak during the FIFA World Cup 2022 in Qatar, which begins in only two weeks.

In the meantime, Haaland, who will not be competing in the World Cup, plans to increase his training and make use of his leisure time.