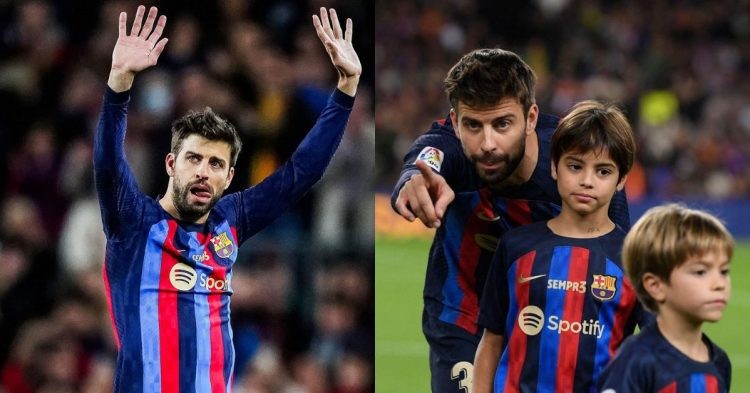 A wedding in Spain was the first public appearance for soccer player Gerard Pique and Clara Chia Marti since he announced his separation from longtime lover Shakira.

While Shakira was filming the music video for “Waka Waka (This Time for Africa),” which served as the FIFA World Cup 2010’s anthem, Gerard got to know her.

Prior to announcing Shakira’s pregnancy in 2012, the couple made their relationship known in 2011.

Putting it all on the line! Within less than four months of his breakup with longtime lover Shakira, Gerard Pique made the announcement that he was retiring from soccer.

When the defender joined the club’s U12B youth team in 1997, he was ten years old. Pique moved to England in 2004 to play for Manchester United, and then four years later, he joined FC Barcelona in his hometown.

Since then, the athlete has contributed to his team’s success by winning three Club World Cups and three UEFA Champions League championships.

Milan, Shakira and Pique’s first child, was born on January 22, 2013. Shakira mentioned that Milan is a gifted pianist and likes to go surfing in December 2021.

Shakira posted on Twitter and said, “We are happy to announce the birth of Milan Piqué Mebarak, son of Shakira Mebarak and Gerard Piqué, born Jan. 22nd at 9:36 p.m. in Barcelona, Spain.”

The former couple was photographed supporting their 9-year-old son at an international baseball event in the Czech Republic earlier in June. Despite parting ways, they have decided to stay friends for the benefit of their children.

Why did Gerard Pique retire?

After 25 years in the game, Pique said in his retirement speech that Barca “has given me everything,” but he’s ready to look ahead to the future.

The Spaniard revealed that he has “always been a Barca fan,” adding that he was “born into a football-loving family of Barca fans.” Pique realised from “a very young age” that he wanted to play for FC Barcelona rather than merely play soccer.

In his retirement video, Pique said, “Now is the time to bring this journey to an end.” I’ve always said that there would not be any other team after Barcelona. “And that’s how it will be.”

Furthermore, he added, “I will pass my love for Barca to my children,” the World Cup champion, who shares sons Milan, 9, and Sasha, 7, with ex-wife Shakira, gushed in the video clip.

“Like my family did with me.” And you know me—sooner or later, I’ll be back. I’ll see you at Camp Nou. Long live Barca. Always.”

– “From a very young age I didn't want to become a footballer, I wanted to be a Barça player. I've been thinking about that kid lately.”

This year, Pique was his team’s fifth-choice centre-back, behind Ronald Araujo, Eric Garcia, Andreas Christensen, and Jules Kounde. Eventually, his coach did not place much of an emphasis on him.

The footballer’s recent breakup from Shakira hasn’t made things better. His alleged affair and subsequent relationship with Clara Chia have generated news about his private life.

One of the catalysts was the criticism Pique faced during Barcelona’s game against Inter. The centre back was angry with the supporters and the team because he had not anticipated this major setback.