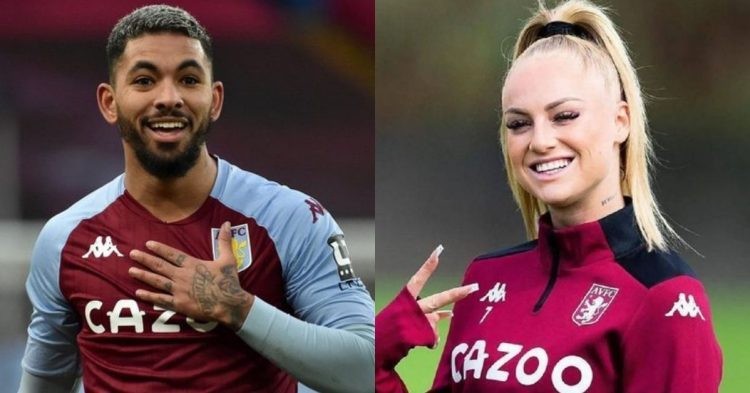 The Brazilian star, Douglas Luiz, came forward to defend his partner by slamming the Brazilian journalist.

The Aston Villa player, who once played for the Spanish side Girona, and was of interest to Atletico Madrid in the summer, hit out at the reporter on the nature of the viral video of her partner, Alisha Lehmann.

The 71-year-old, Brazilian journalist, shared a video of Lehmann celebrating her goal scored against Manchester City in the opening match of the Women’s Super League season.

Alisha Lehmann, who plays for Switzerland on the International stage, has played more than four seasons in WSL.

She currently plays for Aston Villa’s women’s team after a move from West ham United. Alisha Lehmann, who has more than Eight million Instagram followers, is sponsored by Adidas.

Aston Villa couple Luiz and Lehmann have recently been in the headlines after Luiz defended his girlfriend against comments made by a Brazilian journalist.

The reporter tweeted a video of Alisha Lehmann celebrating a goal after scoring for the women’s Aston Villa team. Alongside the video, he wrote, “Without returning to the video, what number was on her shirt?”

Douglas Luiz, denounced the journalist who shared the trending video of Lehmann and captioned, “Watch and give your opinion.”

Luiz wrote on Twitter, “You’re old, you’ve been in football for years, and you post a video that doesn’t respect women’s football and not even the player, who is my girlfriend.”

Further, he said, “You haven’t learned what respect is. That’s bulls**t. “

Subsequently, following these events, the journalist removed the video of Lehmann from social media.

The Aston Villa duo took part in the interesting and hilarious game of “Mr. & Mrs.” The Aston Villa couple have been in a relationship since the end of last year.

Luiz and Lehmann were asked a couple of questions, which they both had to answer by raising a paddle, with either their partner’s face or their own face.

Some of the questions posed in this series included who was the best driver, who was the smartest, and who spoke the most.

After this, they were asked, “Who is the drama queen? Lehmann answered by raising a paddle in Luiz’s face. Lehmann responded with the same answer to the question asked, Who is the diva?

Then, in the end, came the killer question: who was the better footballer? However, peace remained in the room as Luiz-Lehmann decided to hold up both paddles in response.