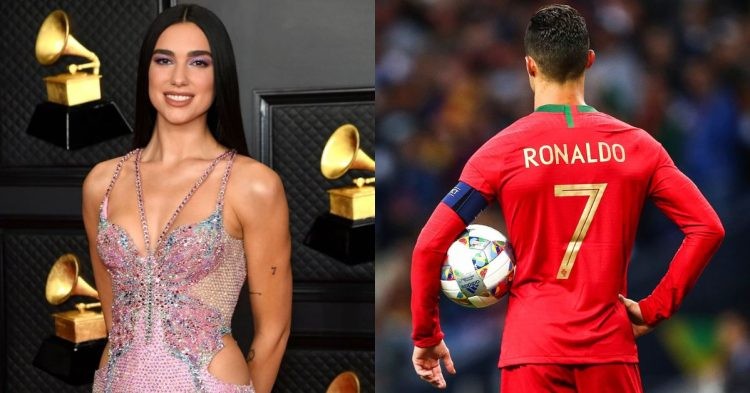 The sport of soccer has not seen many players like Cristiano Ronaldo. The 5x Ballon d’Or winner has truly cemented his status as one of the greatest players of all time. In addition to that, he is arguably the GOAT, alongside Lionel Messi. Just like the Argentinian forward, the Manchester United star’s impact exceeds the sport as a whole as well.

In the past, Ronaldo has been involved with many pop stars and singers. One huge example would be the times he was spotted with Rihanna, who is known around the entire globe for her vocals. Another singer that has been often included in the same conversation as Ronaldo will be Dua Lipa. As you would have read online a while ago, Dua Lipa’s “interaction” with Ronaldo caught the eyes of the world.

For context, Dua looked surprised when Ronaldo did not even take a glance at her. This happened before the 2018 UEFA Champions League final between Real Madrid and Liverpool. Dua was about to enter the pitch for her pre-match performance. Now, Dua and Ronaldo have made the headlines once again.

Did Dua Lipa dedicate her number 7 tattoo to Cristiano Ronaldo?

A Twitter user has hilariously claimed that Dua has dedicated her number 7 tattoo on her bicep to Ronaldo. They tweeted, “Throwback to when world famous popstar Dua Lipa showed her love and admiration for Portuguese soccer superstar Cristiano Ronaldo by getting a #7 tattoo in his honour. When asked about it, she said “I really love Ronaldo, the song ‘Levitating’ is about his INSANE heading ability.”

Throwback to when world famous popstar Dua Lipa showed her love and admiration for Portuguese soccer superstar Cristiano Ronaldo by getting a #7 tattoo in his honour.

When asked about it, she said “I really love Ronaldo, the song ‘Levitating’ is about his INSANE heading ability” pic.twitter.com/Iqznt3Db4D

The tweet seems to be way off the real meaning. The main reason for that would be because Dua has never revealed the real meaning of her tattoo. In addition to that, the English singer never came out to the world and mentioned that her song “Levitating” was about Ronaldo’s heading ability. However, Dua has let the pop world in on the real meaning of the song.

According to Capital FM, Dua mentioned to Apple Music, “This is about me exploring happy songs and doing something that’s not ‘dance crying. ‘It’s about having fun and meeting someone and falling in love and thinking, ‘You’ve probably met me at the perfect time, let’s just go for it.’”

To make things sound more absurd, the Elle website mentions that many believe that Dua’s tattoo is a tribute to BTS, the popular South Korean music group. It has not been confirmed by Dua till now, if she had dedicated her tattoo to Ronaldo or BTS. Regardless, it is quite hilarious to witness fans speculate.