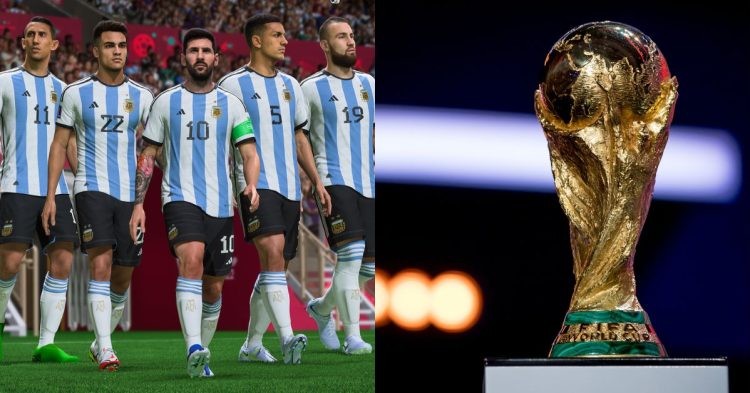 The 2022 FIFA World Cup is just weeks away and fans can’t be more excited. As we near the start of the biggest sports tournament in the world, there is something that has caught the attention of soccer fans. EA Sports, the popular video game developer, holds the official license for the FIFA World Cup. Earlier this month, they announced that there will be FIFA 23 World Cup mode released soon.

It’s Happening! The #WorldCup is coming to #FIFA23 on November 9. 🌏

In addition to that, EA Sports has also predicted the winner of this year’s most-anticipated tournament. It has surprised many as it might have a high chance of coming true.

On the other hand, Brazil will be overcoming huge European powerhouses like Germany and Portugal to enter the World Cup finals in December. Their toughest game will be against Cristiano Ronaldo‘s Portugal in the semi-finals in a 5-4 win through penalties.

The prediction may come as a surprise to many, but both Brazil and Argentina are indeed two of the favorites as we enter the tournament. These two teams met in the 2021 Copa America final where Argentina triumphed in a 1-0 win through a goal from Angel Di Maria. EA has predicted that this might be the case once again. In addition to that, the game has foreseen that Messi will also be the top scorer of the tournament with 7 goals.

EA has got the prediction right so far for the last 3 World Cups. They have officially predicted that Spain, Germany, and France will win the FIFA World Cups in 2010, 2014, and 2018 respectively.

3⃣5⃣ games unbeaten for Argentina after a 3-0 win over Jamaica.

This time around, their prediction might come true once again as well. For the fans who don’t know, Argentina is currently in the middle of an unbeaten streak (35 games) that stretches to 37 games. It is the longest unbeaten streak in international football right now. With that said, can Messi lead Argentina to the golden trophy that he has been looking to win?