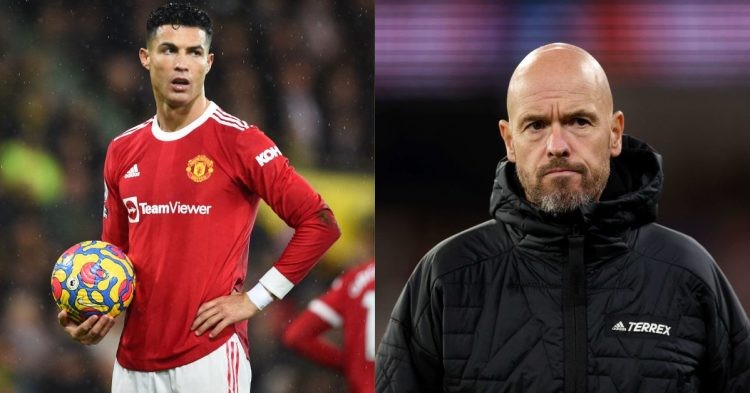 Cristiano Ronaldo hasn’t started much for the Premier League matches this season. The previous season he had managed to score 18 goals making him the top goal scorer for the Red devils. In a recent press conference, before United face Omonoia, it was revealed by Erik Ten hag the real reason for not starting the 5 times Ballon Dor winner.

Erik Ten Hag also reveals the injury situation as he worries about the availability of the players. United has won 3 of the 2 Europa league matches. They have already lost to Real Sociedad at Old Trafford.

Cristiano Ronaldo benched because of a fitness issue

In a recent press conference, when asked about Ronaldo’s absence from the starting eleven, it was revealed by Erik Ten hag that Ronaldo was injured at the start of the season and he also added that he had missed pre-season matches in Australia and Thailand.

Manchester United had faced Liverpool, crystal palace, and Melbourne Victory which were crucial to the manager. Cristiano Ronaldo missed the team’s preseason trip to Thailand and Australia after being allowed time off to attend to a family issue.

We can infer from the manager’s statement that everyone in the squad, including the five-time Ballon d’Or winner, is treated equally. The pre-season tours are required to be attended by every player. Ronaldo has previously missed his preseason games, and the manager is now penalizing him for it.

Erik ten Hag believes Cristiano Ronaldo will “contribute more to the squad” as he is in “better shape” 🔴⤵️pic.twitter.com/mtBWVLbGpN

When asked about Rio Ferdinand‘s comment that Ronaldo is disrespected in his current position in the team, Erik Tan Hag responds in support of Ronaldo, as he wants the better of him. He adds” We have a certain demand of him and what we expect of him in certain positions on the pitch. But that is, I want to get the best out of him. Obviously, he is getting in better shape now and I am happy with that, so he can contribute more to the squad. I’m sure he will do.”

When faced with a lack of options, Erik Ten Hag also discusses the injury issue within the club. He adds Antony martial and Harry Maguire to his long list of injured players. He claims Donny van de Beek and Aaron Wan-Bissaka are injured for a longer term. Ronaldo may have plenty of chance to show himself this season due to Antony Martial’s injury, and he could even earn a spot in the current lineup.