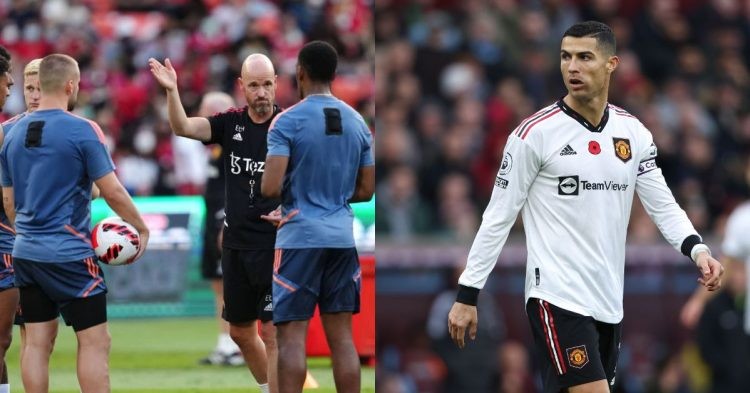 Cristiano Ronaldo and Piers Morgan‘s interview will be the only thing talked about until the World Cup begins. Ronaldo called out the Glazer’s ownership, their mismanagement of the club’s infrastructure, and poor managerial appointments. He even described his management by Manchester United with regard to his future at the club. He also described how they handled him leaving pre-season during a difficult time for his family.

🚨 Cristiano Ronaldo to @PiersMorgan: “Man United tried to force me out. Not only the manager, but also the other guys who are around the club. I felt betrayed”.

“I feel that some people didn’t want me at Manchester United, not only this year but last season too”. #MUFC pic.twitter.com/hCTjPGWgYb

Sky Sports reporter Kaveh Solhekol, in a series of tweets, has revealed more information on how United’s owners, manager, and players have reacted to Ronaldo’s outburst. Although United might not have liked any time this interview was released, its timing makes perfect sense. It is after United’s last game, thus they avoid any distractions. It is also before the World Cup, making it the only thing people speak about this week.

Sky Sports reported Kaveh Solhekol has revealed United’s reaction to Ronaldo’s interview. He said, “Erik Ten Hag and Manchester United players are extremely disappointed with the manner and timing of Cristiano Ronaldo’s interview. Management and players don’t understand why he has said what he has said. They are hugely disappointed that he would disrespect the club, his manager, and teammates in this way.”

Erik Ten Hag and Manchester United players are extremely disappointed with the manner and timing of Cristiano Ronaldo’s interview. Club only found out about the interview as they were preparing to fly back from London this evening after the Fulham game. 1/3

United is on an upward trajectory under Erik ten Hag but has a long way to go. United’s real problem will never be Ronaldo or his ego, but the poor ownership model under the Glazers. But such comments will surely have an impact, consciously or subconsciously, on the players and the coaching staff.

“Ronaldo was told on Thursday that he would not be in the starting XI against Fulham but he would have been in the squad. He told the club he was ill.” Ronaldo’s World Cup campaign will start against Ghana on Thursday, 24th November, before facing Uruguay and South Korea.

Manchester United to consider all options against Ronaldo

According to the Sky Sports reporter, Manchester United will look to respond quickly to this whole Ronaldo saga. On United’s reaction to this, he wrote, “Club only found out about the interview as they were preparing to fly back from London this evening after the Fulham game. Manchester United are likely to now consider all their options regarding Ronaldo.”

Some reporters and fans have even called for the termination of Ronaldo’s contract. Another option would be to allow him to leave in the free winter transfer window. “No one at United has ever disrespected Ronaldo – even after he asked to leave & after he refused to come on as a sub v Spurs.”

A lot of development will take place on this news. With the whole 90-minute interview being released over two days, it shows just how explosive this interview is going to be.