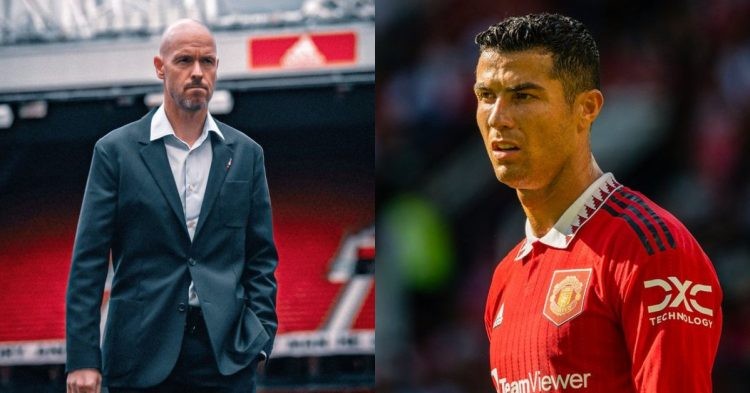 The widely romanticized return of Cristiano Ronaldo to Manchester United last season has come to an end after the appointment of Erik ten Hag.

After being relegated to the bench by new manager Erik ten Hag after missing the pre-season, the Portuguese soccer legend never really managed to claw his way back into the starting XI.

Players like Anthony Martial and Marcus Rashford were preferred in the number 9 role by the Dutch manager. These players offered more flexibility in terms of tactics, a higher wok rate, and defensive contribution.

The final nail in the coffin arrived in the form of an interview. The five-time Ballon d’Or didn’t hold back while commenting on the situation at Manchester United and how he has lost respect for Erik ten Hag. This was followed by an announcement a few days later in which Ronaldo and United announced that they are mutually parting ways.

Fast forward to this week, as the World Cup of 2022 nears its end, Ten Hag has been preparing for the resumption of the Premier League campaign.

ten Hag responded to a question in the press-conference ahead of United’s friendly game with Spanish side Cadiz. The reds’ boss said “He’s gone and it’s the past. We are now looking forward and looking to the future.”

The manager also answered some other questions. He praised the team for beating a world class team in Liverpool. He also highlighted the high points of United’s season, singling out games against Everton and Chelsea.

The Red Devils are all but certain to bring in attacking reinforcements in January.

Here are a few possible transfer targets that they could be looking at.

The Dutch forward has been on Erik ten Hag’s shopping list since summer. He is currently 23 years old and plays for Eredivisie side PSV Eindhoven. The forward is expected to be the next big thing in football. He is a versatile forward who can operate on the left wing as well as centrally.

He has had an impressive season. The Dutchman has netted thrice in his four appearances in the World Cup. At the club level, he has been even more impressive. This season, he has scored 9 nine times and assisted 12 times in the Eredivisie.

The Englishman has been linked with a move to United for almost a year now. He is currently 26 years old and plays for Premier League Club Brentford. He has been in good form of late, netting 10 times and assisting twice this season in the PL. He also has 1 goal and 1 assist in the EFL Cup.

Toney is more of a hybrid number 9. He has the physical traits to play the role to perfection. He also has pace and a keen eye for goal.

This transfer makes a lot of sense for United who will be getting a proven PL player in Ivan Toney.

Ronaldo’s compatriot, Leao, has emerged as the third lucrative option for the Red Devils to weigh up.

The 23-year-old AC Milan forward has already netted twice in the World Cup. He has also impressed in Serie A where he has 6 goals and 4 assists this season.

Erik ten Hag has asked Manchester United to explore the possibility of signing Cody Gapko and Rafael Leao.
He sees Gapko as a center forward while Leao will be one more option for the attacking wings and Ten Hag really like his game.#mufc #gapko #psv #milan pic.twitter.com/tlr6MNiP7D

Aside from blistering pace and world class dribbling abilities, Leao is also a physical threat in the box and is a goal-poacher as well.