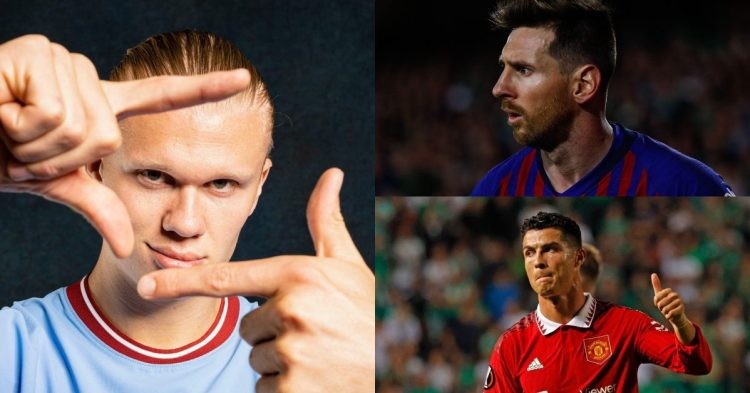 The Norwegian left the German giants, Borussia Dortmund, to join the English champions, Manchester City, in May 2022. City signed Haaland for $51 million, which was his release clause in Dortmund’s contract.

There has been some speculation that Erling Haaland could become the first billion-dollar player in the world. According to his agent, Rafaela Pimenta, he could achieve this accolade in the near future.

The Norwegian has already registered many records under his name in his first season in England. Haaland became the first player to score nine goals in his first five matches in August.

The Manchester City striker has already scored three hat-tricks this season. He could well break the record of most hat-tricks scored in the Premier League this season only.

This might just be the trailer for the climax yet to come. He has netted 20 goals in 14 games for Manchester City in all competitions this season. At the rate at which he is going on, if he stays away from injuries, he could easily have 70+ goals this season.

The Norwegian has already netted an obscene number of goals in the early part of the season, making a sensational start to his Premier League career.

Rafaela Pimenta, who also manages the agency of the great Mino Raiola, believes his next transfer will break all records. She is optimistic that he will make it into the history books with his next move.

Rafaela Pimenta on a potential new deal for Erling Haaland at Man City: “I hope so! If they want to discuss today, we'd be happy. Why not? Always good!”, tells Sky Sport. 🚨🔵 #MCFC

In an interview with Sky Sports, Pimenta said, “One billion. That’s what I think because if you put together his football value, his image value, his sponsor value, it is for sure one billion.”

Furthermore, she added, “And if you compare, it’s normal to compare Erling [Haaland] with [Kylian] Mbappe, so you have a little bit of an idea of the market. I think Erling will be the first player to achieve a transfer that will be around one billion.”

Cristiano Ronaldo and Lionel Messi have been the two players who have dominated football for more than 15 years together. Whether it’s goals, awards, or money, in every aspect, they were at the top.

But now, times have changed. We are seeing a transition phase as Kylian Mbappe and Erling Haaland are set to replace these two in the coming future. They both could have started when the titans were nearing the end of their illustrious careers.

If everything goes as planned by Pimenta, Haaland’s agent, he could become richer than Ronaldo and Messi in the near future. Kylian Mbappe is the only player who could give him a tough fight in this competition.

However, it has been reported that Mbappe is dissatisfied with his current situation in Paris.
It has been said that he wants to leave this January, as he is unhappy. In order to do that, someone has to activate his release clause of $200 million in his current contract.

However, this will make him vulnerable in the future, as after completing his PSG contract, he might be close to Haaland. But, it’s pretty much impossible for the Frenchman.

Meanwhile, everything is going well so far for the Norwegian. He is set to be the richest football player in the future, defeating the giants Cristiano Ronaldo and Lionel Messi.
Stay tuned with Sportsmanor for more news and updates.