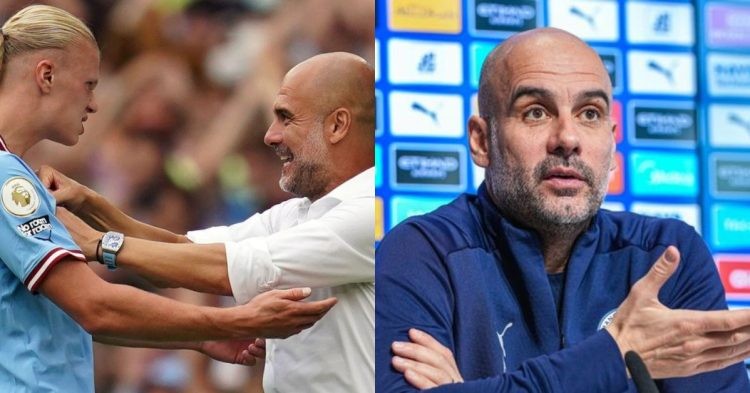 Manchester City‘s Erling Haaland has become the talking point of every match they play. While he does not seem to be involved in the intricate build-up play of Manchester City, he is always at the end of their final ball. So far, he has had a fantastic start at City.

Erling Haaland to Manchester City, here we go! Haaland has passed medical tests as new Man City player today, he’s back in Dortmund. It will be OFFICIAL this week 🚨🔵 #MCFC

Man City told BVB board that they will activate release clause [closer to €60m than €75m] in few hours. pic.twitter.com/heYobi8S1Y

The Norwegian signed for Man City at the start of this season for just £51 million. If agent fees, bonuses, and other costs are taken into account, the fees rise to £85.5 million. This is almost half of how much Tottenham demanded for Harry Kane. It is also the same amount Manchester United paid for Antony. The signing was some very shrewd business from Manchester City.

Pep Guardiola spoke ahead of Manchester City’s big clash against Liverpool. While Erling Haaland failed to score last night due to a combination of factors like poor service and questionable tactics by Guardiola, his runs were always on point.

“He is always there, always he’s thinking ‘I have a chance, I will have one. At the moment, I will arrive, I will have the moment and I will score'”. Guardiola said before the game.

“He’s never disconnected, even when he’s not involved much.” In City’s match against Bournemouth earlier this season, Haaland had the least touches in the whole Manchester City side. Despite this, he registered an assist for the first goal of the match, breaking the deadlock and helping his side to victory.

“I think now he’s more involved than in the beginning, but even when he’s not involved in the process, in the game, he’s never disconnected here [points to his head]. Never ever, and this is the most important thing.

“Sometimes it’s difficult because you have three or four players surrounding him. He has the quality. He can drop deep but we need him there, with his pace, his movement, that’s for sure,” Guardiola concluded.

Haaland has featured in every game for Manchester City this season apart from their 0-0 draw against Copenhagen in the Champions League. Yesterday was the first time he failed to register a goal or an assist this season.

Harry Kane has had a wonderful start to this season as well, but nobody seems to be talking about him. The Tottenham and England striker has scored 9 goals in 10 games, which is golden boot-winning form. However, with Haaland in the same country, he seems to be forgotten. The Norwegian has scored 15 goals already this season and is well on course to beat many Premier League records. His form is better than the best in less competitive leagues around Europe

In the Champions League, he has scored 5 goals in 3 matches. He has also provided 3 assists in the Premier League. Continuing with the trend of touches, Haaland averages only 14 touches per goal he scores. According to Opta, as of October 6, he has touched the ball just 132 times (22 average per match). Almost all other strikers in the league have more than double this amount of touches per match.

With Manchester City’s disappointing loss to a weak Liverpool, Haaland’s astonishing run of getting a goal contribution every game comes to an end. He might just be the key to City’s long-awaited Champions League success.