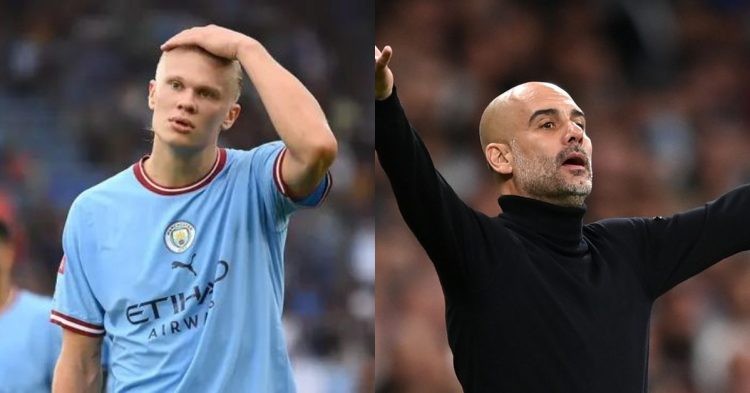 Erling Haaland and Pep Guardiola (Credits : The Guardian and GOAL)

Erling Haaland failed to score against Liverpool on Sunday. Following this anomaly, extensive reports have emerged regarding Haaland and his release clause. He has a reported $223 million release clause which can be activated by non-English clubs only. The release clause can be triggered only in the summer of 2024, so Manchester City has a while before this becomes a problem for them.

Haaland’s start to the season has been nothing short of exemplary. He has scored 15 goals and scored 3 hattricks in the Premier League already. He has also scored 5 goals in 3 Champions League games.

Erling Haaland has “three or four” years at Manchester City

Erling’s father, Alf-Inge Haaland seems to be the one deciding his future at the moment. The former Manchester City player has said that Haaland’s first choice at the moment is City. He said in a documentary about his son, “I think Erling wants to prove his abilities in all leagues. Then he can stay there for three or four years at the most.” He seems to have given Erling a three-year deadline in England.

Manchester City will increase striker Erling Haaland’s wages after the 22-year-old’s superb start to the season. (Star)
Haaland’s father Alf-Inge has said in a new documentary that he only sees his son playing at City for “three or four years”. (Star)#MCFC#LFC #YNWA #ThinkLFCTV

If Haaland does league hop around Europe, he would no doubt get lucrative deals wherever he goes. He seems to be following in the footsteps of Zlatan Ibrahimovic. Both Haaland and Ibrahimovic had Mino Raiola as their agents before his passing, but his model seems to be the direction that Haaland will follow.

Fans love a one-club man. They also don’t have a problem with a player moving to a different league for new challenges, but only to a certain limit. If Haaland does end up playing in every single league, he will no doubt score a huge amount of goals, win a large number of trophies, and also earn huge amounts of money.

But it would only be a matter of time before he is classed in the same category as Zlatan Ibrahimovic, where he is identified by the money he is paid, and not the club he is playing for.

Erling Haaland broke through on the big stage at Borussia Dortmund. He scored 86 goals in his time in Germany across all competitions. According to Dortmund’s Sporting Director Sebastian Kehl, Haaland was a burden on the dressing room.

Speaking to BILD Kehl said, “As much as we always loved Haaland and he was successful with us, in the end, he became a burden on the dressing room, the club, and the whole environment. He had become the subject of every conversation. Outside the club, almost everything was exclusively focused on him.”

This is similar to the current situation of Cristiano Ronaldo at Manchester United, where the player seems to be making headlines, rather than the club. The hardest part of managing world-class players is managing their popularity, both outside and inside the dressing room. While Haaland has not caused any disruption in the Manchester City dressing room just yet, if we look at the evidence of other such big players (Kylian Mbappe, Neymar, Ronaldo) it may be just a matter of time before problems start emerging in Pep Guardiola‘s dressing room.