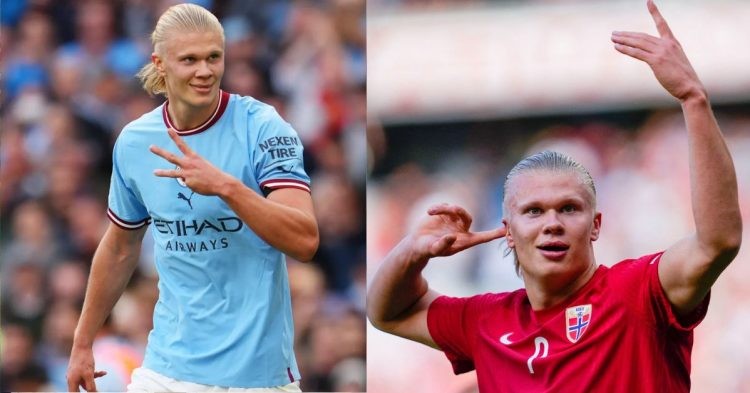 The debate between Lionel Messi and Cristiano Ronaldo has been going on for such a long time that it has been passed over from one generation to another, such has been the longevity of the two at the highest level in European Soccer.

This debate has divided not only fans but even players with some choosing one over the other and today a video of Erling Haaland from his Borussia Dortmund days has emerged where he was asked who would he choose between Messi and Ronaldo.

Haaland was asked certain questions in a talk show where one of the questions was ‘If you had to choose between Messi and Ronaldo, who would you pick’ to which Erling Haaland had no answer and said ‘I cannot answer that’.

It is quite understandable for Haaland to not have an answer as he has grown up watching the two legends play and it is only fair that he didn’t want to choose between them but things got a bit interesting with the next question.

Erling Haaland hopes that he can follow in Cristiano Ronaldo and Lionel Messi’s footsteps by dominating world football #MCFC https://t.co/i1I8SRiFQ0

Haaland was again asked a question that revolved around who he thinks will be the best player in the future. The question was ‘If you had to bet on it, who would win the Ballon d’Or 2025?’.

This time Haaland couldn’t hide his feelings and he very sheepishly whispered ‘Messi’. Looking at what Messi has achieved with Argentina in the past month and Ronaldo moving to Al-Nassr, Haaland might actually be right with that answer.

While Haaland was replying to the question, the host very joyously remarked ‘You could say you!’ and that might not be an overstatement after the kind of form Haaland is in right now for his club, Manchester City.

He has already scored more goals than the Golden Boot winners of the last 4 Premier League seasons in only 20 games. He has scored 4 hat tricks already and it looks like the record for the most goals in a single PL season is in danger.

Erling Haaland has scored 25 league goals for Manchester City this season — only Lionel Messi 2012/13 and Cristiano Ronaldo 2014/15 have done better at the 21st matchday of a league season in this century. [@ThePopFoot] pic.twitter.com/7fPyHws6bd

Erling Haaland is the son of former Leeds United player Alfie Haaland. His first professional club was the Norwegian club Molde where he caught the eye of Europe and was soon signed by the Austrian club, Red Bull Salzburg. He caught the eye of the whole world when he scored a hat trick on his UCL debut for Salzburg against Genk. Teams like Manchester United and Juventus fought for his signature but he choose Borussia Dortmund.

Haaland had three incredible seasons with Borussia Dortmund and was now primed for a big move and he chose Pep Guardiola’s Man City. At Man City, Haaland has looked unstoppable at times scoring goals for fun playing alongside superstars like Kevin De Bruyne and Riyadh Mahrez.

Going by the speed at which Haaland is scoring goals for Pep’s side, his winning the Ballon d’Or cannot be disregarded at all as he is emerging to be a prime contender but will be getting some tough competition from a certain French superstar and it looks like we might be having another generational rivalry at our hands.