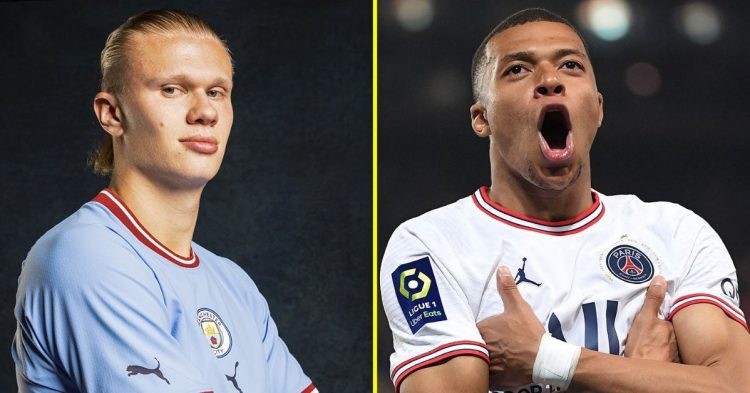 Erling Haaland, with his crisp finishing and wonderful movement off the ball, netted twice in the match. The Norwegian inspired his side to thrash Copenhagen 5-0 in an easy match for Manchester City.

The Norwegian had netted a hat-trick just days before in the Manchester Derby before scoring the brace in this match. We saw a compelling performance from Erling Haaland at the Etihad Stadium over his Danish rivals.

Erling Haaland gives fans one more reason to love him

As we all know, Haaland was in the headlines after he scored a brace against Copenhagen. Meanwhile, the moment that took the main headlines was Haaland’s incredible gesture to the referee.

Donatas Rumsas, who was the official referee in the match, accidentally dropped his vanishing foam as he tried to stay away from the ball. However, a Copenhagen player kicked the spray in the other direction. Vanishing foam is used to mark out free kicks and helps in the placement of walls in the free kick.

In the end, Erling Haaland showed some humility and picked up the spray, and then gave it to the referee in the middle of the match. All the fans in the stadium were shocked to see the humble side of the Norwegian.

Astonishingly, the Norwegian, in no time, joined his teammates in attack to score another goal. All his teammates and all the fans in the stadium applauded this incredible humble gesture shown by Haaland.

Why is Kylian Mbappe disliked by many?

As we saw with Erling Haaland showing humility on the pitch with an incredible gesture toward the referee, Mbappe is completely different. Kylian Mbappe is often associated with his aggressive behavior on the field.

We have seen quite often how Mbappe’s ego and his attitude have always been called into question by the fans as well as some of the great pundits. If a tackle or foul doesn’t go in your way, just respect the decision of the referee and move on.

But Kylian Mbappe never does that. He always tends to get verbally aggressive with the referees, and sometimes we have seen him go physical. Many football players and fans don’t like this egoistic attitude that Mbappe possesses.

Fans react as Haaland is praised while Mbappe is slammed

So, according to some fans, Kylian Mbappe needs to learn some humility and kindness from the Norwegian.

A fan said, “Man’s collecting the powerups for the next level of the game. Haaland: Incredible gesture was shown on the pitch by him.”

A second said, “By far a better attitude than Kylian Mbappe. He has a lot to learn from him.”

The last one concluded, “What has the Frenchman achieved in his career other than a World Cup?” The egoistic behavior and negative attitude need to be changed; some just teach him moral values. “

Both Erling Haaland and Kylian Mbappe have been in incredible form for their respective clubs this season. How often have we heard the speculation that Haaland and Mbappe will be challenging each other for the Ballan d’Or in the future? The future is bright as Mbappe will take part in the World Cup in Qatar, while Haaland will train more individually, as his national side couldn’t qualify for the World Cup 2022.