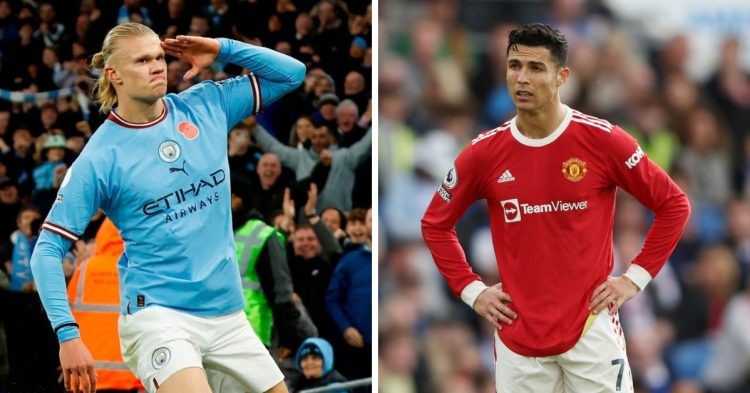 Erling Haaland has made history by eclipsing Cristiano Ronaldo’s Premier League record following his remarkable outing against Wolves. Since his summer move to Manchester City from Borussia Dortmund, the Norwegian has had a sparkling start to life in the English top tier.

The young player has been in outstanding form, breaking some records and equaling others in a mere 20 matches in the Premier League. Despite a few difficult times during the beginning of the second half of the season, the former Salzburg player appears to have regained his momentum.

At the Manchester derby the previous week, Norway international Erling Haaland had been completely excluded, but he managed to make his comeback with a hat-trick on Sunday, January 22, against Wolves. He opened the scoring for City just before half-time and then doubled the lead in the 50th minute through a penalty.

IT’S ONLY JANUARY IN HIS FIRST-EVER PREMIER LEAGUE SEASON 🤯 pic.twitter.com/HlyutEWJr3

According to ESPN, Erling Haaland has topped Cristiano Ronaldo‘s number of hat-tricks with an impressive four since being in the EPL. The City star has achieved this in his first season, one more than Ronaldo’s total of three.

Erling Haaland’s success in the world of soccer has been incredibly rapid. At the young age of 22, he has already made himself known as one of the top strikers, with his impressive goalscoring record as evidence of his potential.

Haaland was recently chosen to be the cover of British GQ in January, and he discussed his role as Manchester City‘s hope to finally break the Champions League curse. His ability to ‘ghost’ during games, using minimal touches to maximum effect, has proven to be too much for the defensive players in the fast-paced Premier League. His muscular build has been a significant factor in his success.

It appears to be only a matter of time before Erling Haaland is crowned the winner of the Premier League Golden Boot race, thanks to his recent hat trick for Manchester City. Meanwhile, Manchester United’s Marcus Rashford has been on an incredible run of form. Before Haaland’s two-game dry spell, he had already made his mark in the league with three goals in his opening two matches after the World Cup.

This season, Haaland has made history in the Premier League by becoming the first-ever player to score 20 goals before January. His current goal tally is even higher than last season’s total of 23 goals, which was enough for Mohamed Salah and Son Heung-min to win the award.

Despite having some goalless games and injuries, Haaland has managed to stay ahead in the race to be the top scorer in the Premier League. Haaland has already amassed 25 goals in the league this season, an impressive tally in only 19 matches. Erling Haaland has amassed a ten–goal advantage in terms of goals scored in the English top–flight, outpacing Harry Kane, the previous winner of the Golden Boot award, who is currently in second spot.