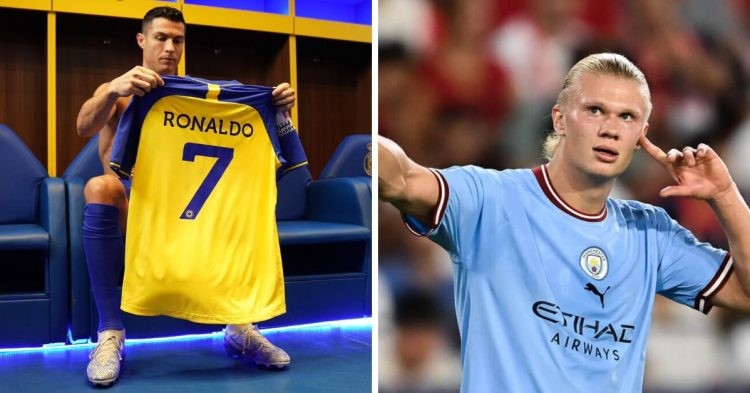 The Manchester City forward Erling Haaland has been showcasing his goal-scoring prowess since his arrival in the Premier League. However, this is not the first time he has made headlines due to his sharpshooting. He had previously demonstrated his scoring ability while at Borussia Dortmund, Red Bull Salzburg, Molde, and while a part of the Bryne youth academy. In the 2022-23 season, he scored 27 goals in just 24 matches.

The young Norwegian striker has snubbed Cristiano Ronaldo as his role model following the transfer of the Portuguese superstar to Al-Nassr. The 22-year-old Manchester City forward had previously expressed his admiration for the five-time Ballon d’Or winner, but he has now stated that he looks up to other players instead.

Ronaldo’s move away from Manchester United to Saudi Arabian club Al-Nassr marked the end of an illustrious career in Europe, and it was seen as a surprise move by many. Haaland, who is widely regarded as one of the most promising young talents in world football, had previously described Ronaldo as his role model. However, in the wake of the transfer, the youngster has revealed that he now looks up to other players instead.

In a recent interview with GQ, Erling Haaland said he was raised observing other strikers intently, mirroring their actions, and figuring out what made them stand out. He mentioned  “From Zlatan to Van Persie to Vardy to Aguero, Messi,” as his idols.

Erling Haaland names his idols, and Cristiano Ronaldo is not included

Erling Haaland is one of the most promising young footballers in the world. The Manchester City star forward has made a name for himself in the past two seasons, becoming one of the most sought-after players in Europe.

Haaland has been vocal about his admiration for a number of footballers. Recently, he was asked to name his idols. Surprisingly, Cristiano Ronaldo was not included in his list.

However, it’s not like Haaland has never looked up to Ronaldo. In the past, the Norwegian footballer has spoken highly of the former Manchester United forward and has even compared himself to him. In an interview back in 2019, Haaland said that he dreams of becoming like Ronaldo and doing what he has done.

Haaland has also been compared to Ronaldo in terms of potential. Both players have similar physical attributes and the same hunger to succeed. So, who did Haaland name as his idol? He listed some of the greatest footballers of all time, including Lionel Messi, Zlatan Ibrahimovic, and Sergio Aguero.

In the coming years, Haaland will have a chance to emulate his idols. He is already being hailed as one of the best young players in the world, and he could soon become one of the best forwards in the game.

In the end, it’s clear that Erling Haaland has some of the greatest players of all time as his idols. While Cristiano Ronaldo may not be included in his list, there’s no doubt that the Manchester City star forward still looks up to him.