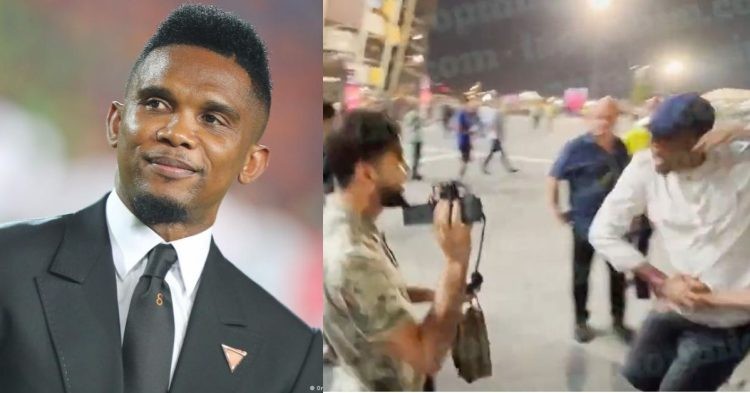 The FIFA World Cup 2022 has witnessed another off-the-pitch controversy. Samuel Eto’o, the legendary Cameroon striker has found himself in the deep waters after he assaulted a fan outside Stadium 974 in Qatar. The incident took place after the match between Brazil and South Korea. Many fans have captured the incident on their phones and the video has gone viral on the internet.

🚨 Samuel Eto’o attacked a young man last night before the match between Brazil and South Korea. 😳

Samuel Eto’o has been regularly attending World Cup matches in Qatar. After the match between Brazil and South Korea, Eto’o was spotted walking outside the stadium along with his entourage. Eto’o was obliging the fans with selfies when a certain fan seemed to get into a scuffle with Eto’o.

It seemed initally that the fan was simply talking to Eto’o, but something must have irked the former Barcelona player. While his entourage tried to separate the two and stop Eto’o from assaulting the fan, one man snatched the camera from the hands of the fan and broke it.

Albeit several men tried to restrain Eto’o, the president of the Cameroon FA was determined in his pursuit. Eto’o was seen rushing toward the fan and shockingly, he kicked the fan’s face with his knees.

The fan who was assaulted by Eto’o has been identified as Said Mamouni, an Algerian YouTuber. Said Mamouni has revealed the reason which caused Eto’o’s violent assault. Mamouni said, “I asked him how is Bakary Gassama [African World Cup playoff referee], and if he gave him a bribe, he hit me and destroyed both my camera and mic, I know I will take my rights here in Qatar as it is a state of law, he did hit me in the chest and the face and in my elbow.’‘

As per reports the Algerian youngster Saïd Mamouni just confirmed in a video that he asked Eto’o how much he gave Papa Gassama the Gambian referee for Cameroon to win their World Cup match against Algeria.

Said Mamouni has further stated that he will file a police complaint and press charges against Samuel Eto’o.

As soon as the shocking video of Samuel Eto’o kicking a fan’s face with his knees became public, the Internet has been flooded with fans’ reactions. This incident has not gone down well with the fans. Fans have condemned and criticized the legendary Cameroonian striker who has scored 56 times for his nation.

Here’s a look at what fans have said about the incident.

It doesn’t matter what the cameraman said, Etoo used his status to abuse the poor guy. Someone should bully him the same way

@SamuelEtoo, no matter what that YouTuber has done to warrant you acting this low, I want you to know that it wasn’t the guy; it was you who has always been that low.

But, were it to be me, I would have certainly given you a fight. You can’t bully me in such a manner. Nonsense! https://t.co/sCMZSRp56V

No I wouldn’t..maybe you would but not me..how can a man at the level of Eto o allowed a random guy provoke him to fight in public…do you think Eto as of today is proud of his actions ?

Although, while a majority of the fans have criticized the former Inter Milan and Chelsea striker some fans have also defended Eto’o and his actions.

Bravo Eto’o. This man and thousands of other Algerians 🇩🇿 have been harrassing Eto’o, Cameroonians and referee Gassama because they failed to qualify to the world Cup. It was time someone put them in their place. If you can’t perform take it on your coach and players not others

The photographer is Algerian, and he provokes him every time, accusing Eto’o of bribes and corruption, which caused the exclusion of Algeria by Cameroon. I’m Algerian, and I’ve seen it in previous attempts to provoke him.
all this to harm Cameroon

This is not the first time that Eto’o has been accused of violence. During his playing days at Inter Milan, Eto’o was once handed a three-match ban for headbutting an opponent. While rumors continue to make ways about this incident, there has been no official response from Samuel Eto’o yet.