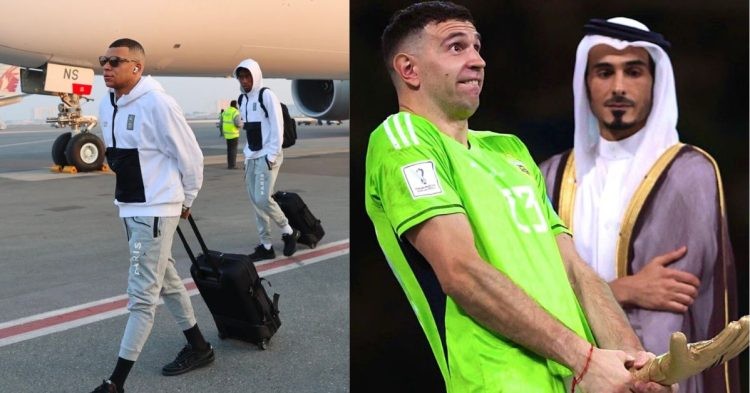 It’s been already more than a month since the FIFA World Cup 2022 final took place, and Kylian Mbappe is still traumatized by it. Argentina defeated France in a nerve-wracking final at the Lusail Stadium in Qatar. Lionel Messi finally had the crowning moment of his career as he captained Argentina to their third World Cup title. However, Mbappe seems to have still not forgotten about Emi Martinez’s antics after the final.

Argentina goalkeeper Emiliano Martinez’s actions after the final and during the celebrations back in Buenos Aires created a huge controversy. Many fans felt that Martinez’s actions publicly insulted the French soccer star Kylian Mbappe. Martinez first came under the spotlight while accepting his Golden Glove award just after the final. Martinez, after accepting the award, celebrated rather wildly by holding the award near his crotch.

What’s your thoughts on Emi Martinez holding a baby doll with a Kylian Mbappe mask? I thought there was no need for him to do it & it’s now getting a bit to much. pic.twitter.com/DRDEjVU4w6

In addition to that, when the Argentina players went back to Buenos Aires to celebrate with the Argentine fans, Martinez once again created controversy. Martinez was spotted holding a baby doll with the face of Mbappe stuck to it. These incidents sparked a huge debate in the soccer world, with many former soccer players and pundits criticizing Emi Martinez.

Most recently, Kylian Mbappe was seen imitating Martinez’s Golden Glove gesture outside the training camp of PSG. This action has immediately gone viral on the Internet, with many fans claiming that Mbappe is still traumatized by Emi Martinez‘s celebrations. However, Martinez did have a reason for his controversial gesture with the Golden Glove award. According to La Red, Martinez said, “I did it because the French were booing me.”

Although it seems like Martinez’s actions still haunt Mbappe, the PSG star’s response was on the contrary. After the World Cup final, Mbappe took only a few days off and immediately returned to training at PSG. The World Cup Golden Boot winner wasted no time, as he scored the winner during PSG‘s 2-1 victory against Strasbourg.

After the game, Mbappe was asked about Emi Martinez’s controversial and disrespectful celebrations. As per The Guardian, Mbappe said, “The celebrations, they’re not my problem. I don’t waste any energy on such futile things. What’s important for me is to give the best of myself for my club, and we’re looking forward for Leo [Messi] to return to continue scoring and winning matches.”

However, Mbappe avoided commenting any further about the issue. Mbappe still seems to have a normal relationship with his PSG teammate and Argentine captain, Lionel Messi. Both Messi and Mbappe returned to the scoresheet during PSG’s 5-4 win against the Riyadh XI in a friendly in Saudi Arabia a few days ago.