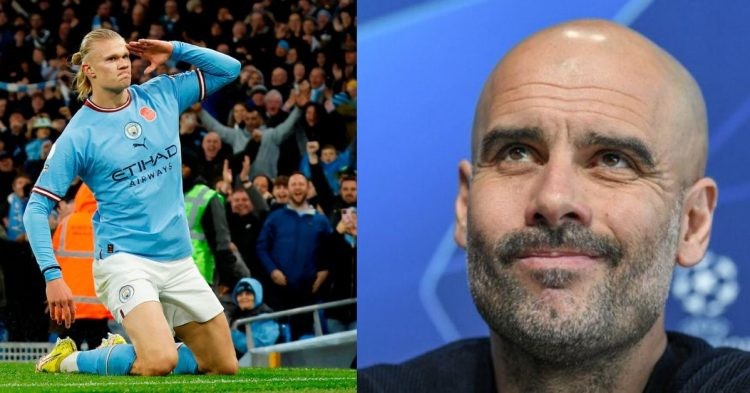 In a sarcastic response to another jab from his longtime rival Zlatan Ibrahimovic, Pep Guardiola bluntly stated that he is envious of Erling Haaland.

Haaland will only continue to thrive at Manchester City if manager Guardiola controls his ego, according to seasoned former FC Barcelona striker Ibrahimovic.

When the Catalan was in command at the Nou Camp more than ten years ago, Ibrahimovic and Guardiola had a falling out, and Ibrahimovic has remained critical ever since.

Ibrahimovic compared himself to a Ferrari in his book, saying that he demanded premium fuel and should be driven aggressively on the highway, but he said that Guardiola handled him like a diesel-powered Fiat in rural areas.

Manchester City went atop the Premier League table for a day after beating Fulham on Saturday. The win came courtesy of a late Erling Haaland penalty won by Kevin de Bruyne.

Manchester City took an early lead after Julian Alvarez scored a banger to give City the lead. Unfortunately, everything went haywire for Manchester City after the goal.

Joao Cancelo conceded a foul on Harry Wilson and got a red card for his cynical foul. Most of the game remained level until Kevin de Bruyne won a penalty in stoppage time.

Erling Haaland stepped up and scored beautifully to win the game for the English champions.

In the postmatch interview, Pep Guardiola said, “He is right; he is completely right.” “In this club, in this team, my ego is beyond every other person, every other player.” I don’t like it when Erling scores three goals and all the highlights are for him. I’m so jealous! “Honestly, I’m so jealous!”

Furthermore, he added, “I said, ‘Erling, please, no more goals; otherwise, the newspapers won’t talk about me and just about me.’” He’s right; he [Ibrahimovic] knows me perfectly. Maybe he can write another book.”

Eventually, with the win, City will ascend the Premier League table with 1 point above Arsenal. The Gunners will feature on Sunday in a London derby against Chelsea at Stamford Bridge.

How many goals has Erling Haaland scored this season?

Following his transfer to the Premier League, the Manchester City forward has been scoring goals at will, but the 2022–23 season is by no means the first time he has garnered attention for his deadly finishing.

Zlatan Ibrahimovic's comments on Pep Guardiola's ego appear to have touched a nerve with the Man City boss! 😳 pic.twitter.com/8JDtxWApS5

Erling Haaland has been in scintillating form for Manchester City since his arrival. At the rate at which he is scoring, some pundits are scared he might break all the records in his debut season.

Erling Haaland has scored 23 goals and provided three assists in 17 matches for Manchester City in all competitions this season. He already has three Premier League hat tricks in his debut season.

Erling Haaland failed to qualify for the FIFA World Cup 2022 in Qatar with Norway. He will look to train more and focus on his game to improve and score more.