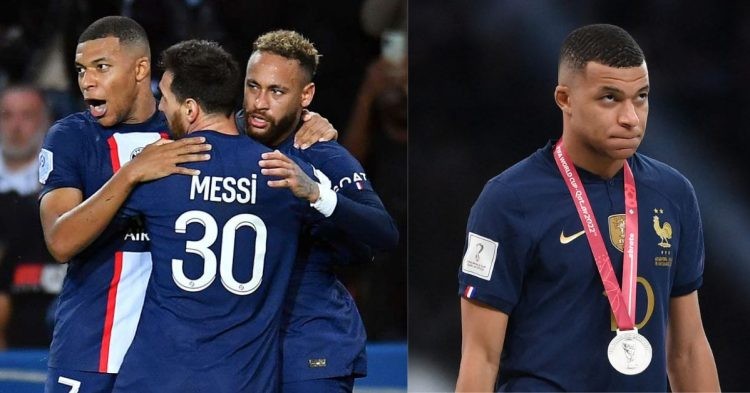 Kylian Mbappe has been caught lying red-handed about his club Paris Saint-Germain’s situation. There was a lie detector set up by the Ligue 1 champions for their YouTube channel. In that, Mbappe was heard saying all is good within the team. However, the lie-detecting machine stated that the French star was lying.

The question was related to the fashion sense of his teammates. He was asked, “Is there someone on the team who is known as having the worst fashion on the team?”

A thumbs down was shown to that answer which meant that Mbappe was lying about the team’s situation. His teammates include the dynamic duo of Lionel Messi and Neymar Jr. Is there some issue between him and these teammates that may have caused him to lie and say all is good?

Other PSG players that took the test included Sergio Ramos, Mbappe’s good friend Achraf Hakimi, Presnel Kimpembe, and Marquinhos. In this video, the players were shown their EASports FIFA 23 cards for the first time.

How is the relationship between Kylian Mbappe, Lionel Messi, and Neymar Jr. post-FIFA World Cup 2022?

Mbappe Neymar and Messi are fresh out of a winter World Cup campaign. The FIFA World Cup 2022 took place in November and December cutting between the domestic season. Messi and Argentina turned out to be the eventual champions of the world, while teammate Mbappe was left sulking after a fantastic final performance on December 18, 2022.

Mbappe scored a hattrick for France while Messi scored a brace in the final to end 120 minutes of the final with a scoreline of 3-3. Emiliano Martinez made a fantastic save in the penalty shoot-out to help Argentina beat France 3(4)-3(2). Neymar, on the other hand, tasted defeat in the quarter-finals as Brazil lost to Croatia in penalty shoot-outs 1(4)-1(2).

Mbappe and Hakimi missed Messi’s welcoming. They are in New York… pic.twitter.com/3o0paNg0E6

They all returned back to France in different time frames. Mbappe and Neymar came in early while Messi took his time. When Messi returned and received appreciation for his quality performances in Qatar, Mbappe was absent. The Frenchman was on a leave with teammate Hakimi. Meanwhile, Neymar was present and wholeheartedly welcomed his World Cup-winning friend.

Amidst all the speculations about the trio not getting along, they seem to have no choice at this point. Their main objective this season is to win the UEFA Champions League. They have been brought to the Qatari-owned club for exactly that. PSG is set to face Bayern Munich on February 14, 2023, in the first leg of the Round of 16.