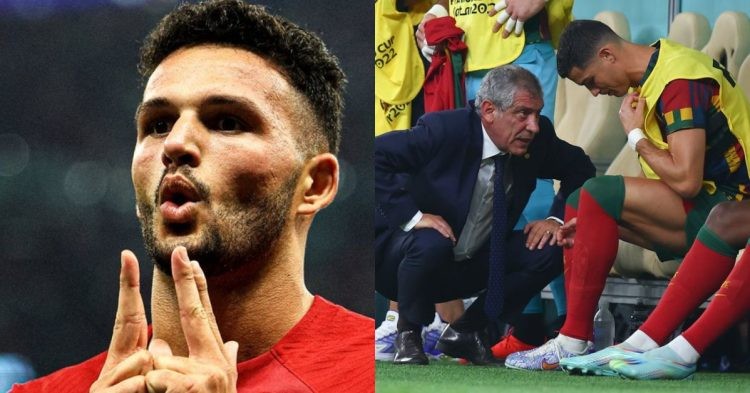 Cristiano Ronaldo dropped to the bench as his replacement shines. (Credit: Twitter)

It almost seems as though controversy has been the second name for Cristiano Ronaldo.

The Portuguese captain has, time and again, found himself amid freshly brewed controversy. This is not exactly news to Ronaldo, who has been dealing with it for years now. However, this season seems to be particularly highlighted by the sheer number of fans triggered by his actions on and off the pitch.

Fans have been calling out the veteran forward after somewhat of a misleading video surfaced on the internet. In the video, Portugal‘s squad was seen celebrating their dominant victory against Switzerland in a 6-1 thrashing in the Round of 16 of the FIFA World Cup.

#Portugal far better without Ronaldo. Walked off without celebrating with his teammates. Proving that #ManchesterUnited were right to get rid.

Many seem to have been triggered by this video on the internet. For most, what the video showcased, was reminiscent of another incident. Earlier this season, the five-time Ballon d’Or winner walked off the pitch in Manchester United‘s 2-0 victory over Tottenham Hotspur in the Premier League.

Ronaldo was an unused substitute in this game. He had walked off the pitch several minutes before the full-time whistle. He made his displeasure at not featuring in the game, known, through this action.

The legend received a lot of flak online after this incident. The video that surfaced after the game yesterday, which was not the full recording, misled some fans to assume that something similar had transpired.

Subsequently, however, clippings of the full video surfaced on the internet, doing justice to Ronaldo’s patriotism and commitment to the team, which had been called into question earlier.

The full version of the video showed that while his compatriots rode the euphoria of progressing to the quarter-finals, he walked toward the stands. There, he held his hands above his head and applauded the Portuguese support in the stands.

You know what I find disappointing? Seen headlines saying Cristiano Ronaldo walked off last night without acknowledging the Portugal fans which is not true. He didn’t celebrate with the rest of the players as he didn’t want to take their glory. He is for me a 🐐 pic.twitter.com/TlRgy3lEZn

once again the media cuts out the gud parts and
post cr7 walking out to fuel their Agenda
nah this is crazy pic.twitter.com/Wl99COsCz9

The 37-year-old’s fans have wasted no time in coming to his defense. Fans were all praises for their GOAT.

Fans have defended him by saying some heartfelt things, highlighting their devotion to Ronaldo.

“Headlines of Ronaldo walking off without acknowledging the Portuguese fans, are just not true.”

“He didn’t celebrate with the team because he didn’t want to take the team’s glory.”

If we are to go by the full version of the video and the fans’ comments, it does seem as though Ronaldo simply went to acknowledge the fans and thank them for their support. At the same time, he probably didn’t want to steal the team’s glory, in which he had little role to play.

Even though the air has been cleared, one thing is for certain. Controversy always finds its way to the biggest names.