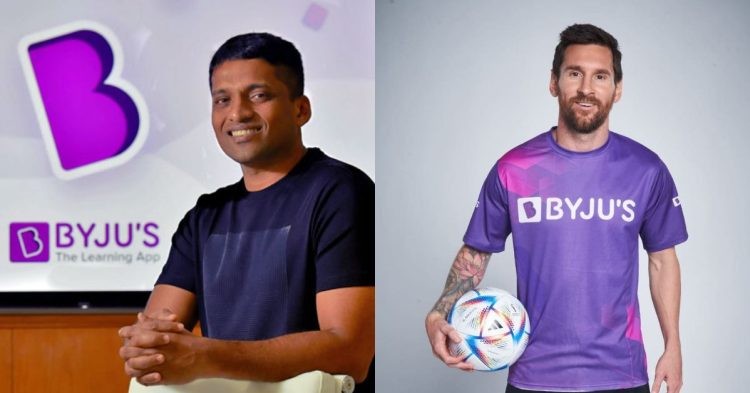 As we all know, Lionel Messi is one of the best soccer players in the world. Even at 35 years old, he has proven that he still has what it takes. Apart from the magic he displays on the pitch, Messi has been working hard off it as well. According to various reports, the Argentinian’s net worth stands at about $600 million. He has worked with a long list of companies as an ambassador. It seems like he has added a $22 billion company to it now.

A multinational company is known as BYJU’s recently unveiled that Messi will be their new brand ambassador. BYJU’s is an educational company that focuses on helping students all over the world. The PSG superstar will be the face of the “Education For All” project that the Indian company is emphasizing on. The program is aiming to provide free education to underprivileged children.

How much does BYJU’S pay Lionel Messi?

According to various reports on the internet, BYJU’s will be paying Lionel Messi about $5-7 million per year for his current deal. If that wasn’t enough, the company has also spent a huge amount that is the range of tens of millions to sponsor the FIFA World Cup 2022 as well.

However, fans have not received Messi’s deal well. The main reason for that would be the fact that BYJU’s laid off about 2500 employees just a few weeks ago. Many believe that it was to secure Leo’s signature on the dotted line and have criticized the company. A user tweeted, “To accommodate Lionel Messi’s remuneration” to the news.

Founder lost his ‘own 5%’ and then spent millions on investor money to get a new brand ambassador- may be just to get an opportunity to meet Messi and get a pic clicked. That’s the value of employee livelihood.

So that they could afford him.. global branding is so important..🙄🙄

Now 2500 ex Byjus employees can sit at home and watch Messi play football in Quatar. Parents who got their wards enrolled and are now regretting it can do the same.

For context, BYJU’s CEO Byju Raveendran said, “I realize that there is a huge price to pay for walking on this path to profitability.” He mentioned that he had to fire a large group of employees due to the losses the company had incurred. However, fans find it interesting and are disgusted by the fact that he claimed that they were on the road to profitability but still had the budget to get the greatest soccer player of all time on board.