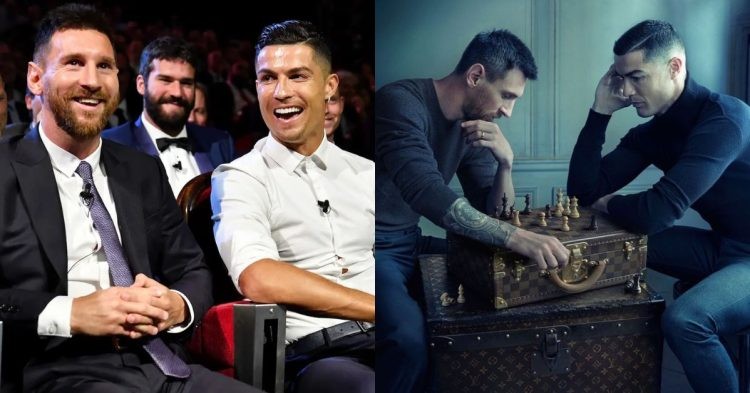 Cristiano Ronaldo and Lionel Messi are two of the biggest athletes in all of the sports. Many will remember the way these two players have impacted the world with their magic on the field for generations to come. Ronaldo and Messi’s achievements add up to 12 Ballons d’Or, 9 UEFA UCL trophies, and more than 1500 goals scored.

Ronaldo and Messi have paved the way for soccer players. If that wasn’t enough, they have broken countless records to show that they are indeed two of the greatest athletes to exist. Both of them are used to breaking expectations that haters set for them on the pitch. But this time around, the pair have done it off the field.

Victory is a State of Mind. @Cristiano and #LionelMessi captured by @annieleibovitz for @LouisVuitton. In addition to a long tradition of crafting trunks for the world’s most coveted sporting trophies, the Maison celebrates two of the most talented football players today. pic.twitter.com/AU9kPyI2wL

Ronaldo and Messi have featured in an iconic image together that seems to be breaking the internet, as expected.

Why did Cristiano Ronaldo and Lionel Messi take a picture together?

For those who don’t know, the two soccer icons are the faces of a new Louis Vuitton campaign. The name of the new project is “Victory Is a State of Mind”. In the image, we can see Ronaldo and Messi staring intensely at the chessboard, implying that they might be in the middle of a serious chess game.

The fashion house has chosen to place the checkerboard on top of the Louis Vuitton Damier case. Annie Leibovitz captured the iconic image.

Victory is a State of Mind. A long tradition of crafting trunks photographed by @annieleibovitz for @LouisVuitton pic.twitter.com/0TsieZP40P

Both Ronaldo and Messi posted the image on their social media handles as well, promoting the new campaign. However, soccer fans have noticed an interesting detail about the stars’ posts.

Messi and Ronaldo posted the same pic, They both didn’t tag themselves.

Ronaldo and Messi posted that picture and didn’t tag each other 😭😭A collab post would definitely have shattered IG.

A large group of Twitter users has pointed out the fact that both Ronaldo and Messi did not even tag each other in their social media posts. This might be one to sting for soccer fans since a proper collaboration post would have broken records, as one fan claims.

However, it would be safe to say that Louis Vuitton did a tremendous job in advertising with two of the biggest sports personalities in the world ahead of the biggest sports tournament in the world; FIFA World Cup 2022. Ronaldo is gearing up for the World Cup ahead of Portugal’s opener against Ghana on November 24th. On the other hand, Messi is getting ready to face Saudi Arabia on November 22nd with Argentina.