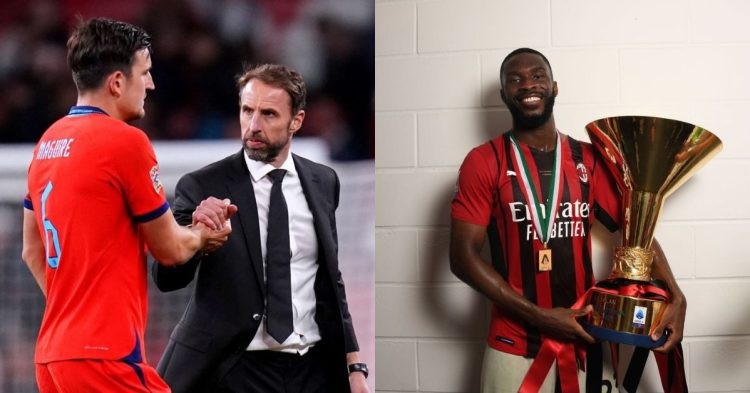 The FIFA World Cup 2022 is just days away and teams have started to announce their squads to the world. One of the strongest teams, Brazil announced their squad a couple of days ago. Recently, England caught the attention of the soccer world when they announced their 26man squad as well.

The wait is over.

Does Harry Maguire deserve to be in the World Cup squad instead of Fikayo Tomori?

Fans took to Twitter to express their opinions on why AC Milan center-back Fikayo Tomori should have had the spot.

Gareth Southgate picks Conor Coady and Harry Maguire – who’s been benched at Manchester United this season – ahead of Fikayo Tomori who’s arguably been England’s best and most in-form centre-back the past 12 months. Favouritism at its’ finest.

A fan said, “Gareth Southgate picks Conor Coady and Harry Maguire, who’s been benched at Manchester United this season, ahead of Fikayo Tomori who’s arguably been England’s best and most-in-form centre-back the past 12 months. Favouritism at its’ finest.”

The fact that Maguire gets a call up over Tomori is beyond me. Ten Hag really is the first manager to see the light by not playing him

A bench sitter in Man United getting picked over a Serie A winner 😫😫 pic.twitter.com/0EhDkwULbI

Tomori quite literally won a title. I get that Southgate likes Maguire but this quote feels like a violation. https://t.co/nEKn26bJMZ

For those who don’t know, Tomori enjoyed a wonderful season with the Italian club last season. He helped the team to a Serie A title in the 2021-22 season. The Rossoneri ended the drought for the Scudetto after a decade. Tomori was a rock at the back for the team throughout the entire season. As Milan sit 3rd in the table this season, 8 points behind 1st placed Napoli, Tomori has been a starter once again.

Gareth Southgate on Harry Maguire & Fikayo Tomori: “We don’t think the young ones [centre-backs] have done quite enough to push the older ones out”. 🏴󠁧󠁢󠁥󠁮󠁧󠁿 #WorldCup2022

“Yes, I’m sure Harry Maguire is one of our best centre backs”. pic.twitter.com/j9MNgYMwfq

When the media began asking Southgate questions regarding Tomori’s exclusion from the squad, he mentioned that the younger players have not done much to push the veterans out of the team. Adding on to that, he also claimed that Maguire is one of England’s best center-backs even if he does not have the match minutes to show for it. That has also received some response from Twitter users lately.

🗣️ Gareth Southgate on the World Cup call-ups: “Tomori? Maguire is one of the best. The younger ones haven’t done enough…..”

The user tweeted an image of Tomori holding the Serie A trophy at the end of last season. To put it into perspective, Tomori has played more than 1,500 minutes across all competitions for Milan. However, Maguire has been selected despite only playing for a mere 511 minutes for Manchester United. The main reason for that would be his injuries and lack of form which prompted Erik ten Hag to leave him out of the squads.

To be honest, it might be an interesting choice, but Southgate has claimed that he is vital, which isn’t wrong at all considering his performances at the last World Cup.