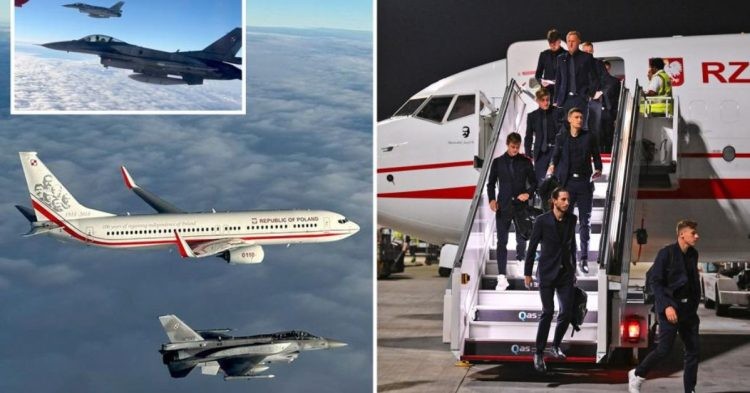 The FIFA World Cup 2022, the biggest and most prestigious football competition in the world, is just around the corner, and fans are already anticipating it.

The 2022 FIFA World Cup will be held in Qatar, and it will be the 22nd edition of the illustrious competition.

Just a few days after two Poles were killed in a missile strike, the Polish national football team was escorted by F-16 fighter jets as it made its journey to the World Cup in Qatar on Thursday.

In a video uploaded to the team’s official Twitter account, two fighter jets can be seen flying close to a plane bearing the words “Republic of Poland.”

According to reports, the football team received a high-profile escort because two Poles were killed when an errant missile fell in Poland.

The Polish National Football Team also posted a picture of one of the F-16 jets that was circling the plane.

According to Polish press reports, the aeroplanes tracked the national team’s plane until it left Polish territory.

Later, the team arrived in Doha, the capital of Qatar, without incident. On November 22, the team will compete in its first World Cup match.

Two people were murdered Tuesday when a Soviet-era rocket crashed into the small village of Przewodow.

After the terrible incident, an emergency NATO meeting was conducted. Meanwhile, Poland’s president, Andrzej Duda, declared that the “unfortunate tragedy.” However, it is said that it was probably caused by a Ukranian air defence missile.

An F-16 fighter jet of the Polish Air Force escorted a plane with the national team to the border of the country's airspace, which is heading to Qatar, where the #WorldCup will be held. @PolandMFA pic.twitter.com/gUR1pORvz2

Eventually, prompting the Polish government to take these extraordinary safety precautions in relation to the national soccer team’s travel schedule.

The tragic incident occurred In Poland who is a NATO member. Evidently, it was the first time that a missile fired during Russia’s war in Ukraine directly impacted land.

Czeslaw Michniewicz, the manager of Poland, has reduced his initial 47-man provisional roster to 26.

The European team is scheduled to play Argentina, Saudi Arabia, and Mexico in Group C of the Qatar World Cup.

On November 30, Poland’s final group stage match is planned. Argentina, one of the favourites to win the championship and led by Lionel Messi, will be their opponent.