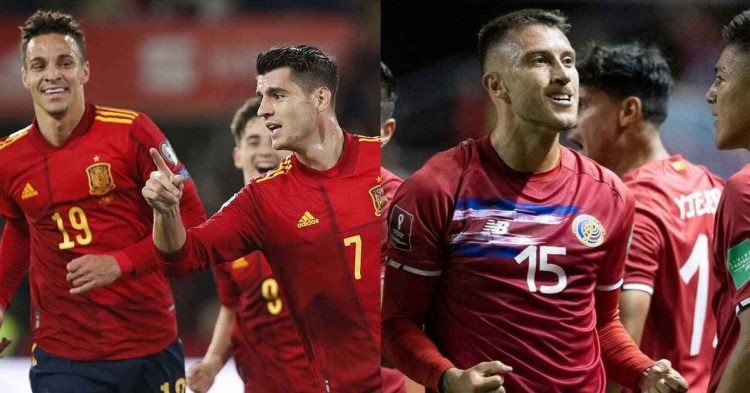 Spain starts their FIFA World Cup 2022 campaign against Costa Rica in their opening match in Group E. Spain has a massive opportunity to redeem itself after two consecutive abysmal campaigns.

Group E in the FIFA World Cup 2022 has been accorded the title of “the group of death.” It includes Germany, Japan, Spain, and Costa Rica.

Before the two European heavyweights clash with each other, they have separate battles ahead. The most anticipated match in this group, for now, is Spain vs. Costa Rica.

🔥 Another full day of football!@adidasfootball | #FIFAWorldCup

La Roja lost a penalty shootout to the hosts Russia in the Round of 16 four years ago. Meanwhile, Spain entered the 2014 campaign as the defending champions. Unfortunately, they suffered a shocking group-stage exit in the 2014 FIFA World Cup.

Luis Enrique said in an interview, “They are young, and for that reason, they are brimming with energy and hope. I am hoping to see the best of them, and play seven games at this World Cup.”

Here is all the information you need to know regarding how to watch the game live online or on TV in the United States:

How to watch Spain vs. Costa Rica in the US?

Fox Sports and Telemundo will both broadcast Spain vs. Costa Rica in English on American television. All Spanish-language World Cup broadcasts in the US, meanwhile, will air on Telemundo.

Both FS1 and Telemundo are streamable on fuboTV for viewers in both English and Spanish in the US.

The Spain vs. Costa Rica match will also be streamed live on Telemundo Deportes En Vivo, Peacock Premium, and Universo Now in the US.

What time will Spain vs. Costa Rica start?

Spain will look to start their campaign with a win against Costa Rica. On paper, the Central American side looks like the weakest team in the group.

Luis Enrique would not underestimate the Costa Rica team. Costa Rica is the only Central American team to win a match in the World Cup.

Especially, Enrique would be aware of the fact that the title contender Argentina lost to Saudi Arabia. He knows that in this competition every team has a good chance of winning against any team.

Spain’s young squad would be led by FC Barcelona talisman Sergio Busquets and young guns such as Gavi and Pedri.

Spain is the favorite to win this game, as Costa Rica would hope for another major upset in the tournament. The options available from the bench for Spain would be a massive advantage in the game.

We predict an easy 2-0 win for Spain as the squad with the young talent they possess will be too much for the Los Ticos.