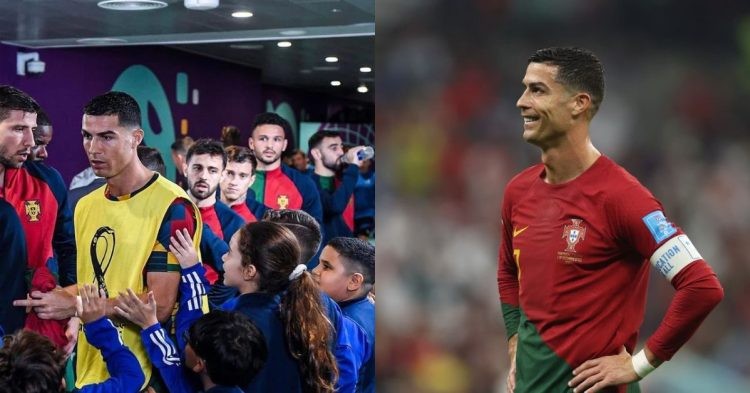 News surrounding Cristiano Ronaldo has not been very positive throughout this World Cup. He was accused of falsely claiming a goal that was later awarded to Bruno Fernandes. Ronaldo was then accused of threatening to leave the Portuguese camp after manager Fernando Santos had benched him in the knockout match against Switzerland.

Cristiano Ronaldo denies all rumours on his intention to leave World Cup: “This group is too united to be broken by external forces. A nation too brave to be intimidated by any adversary”. 🚨🇵🇹 #Qatar2022

“This is a true team, that will fight for the dream until the end”. pic.twitter.com/th85FEBmjm

Ronaldo and the Portuguese FA refuted these claims very quickly. He even commended the togetherness of the current squad. He remains focused on his country’s World Cup campaign. A recent photo of Ronaldo walking through the tunnel before a match has emerged. It went viral due to the reaction of the children walking out with the players.

Ronaldo is one of the biggest and most popular players in the world. Before the match between Portugal and Switzerland, the players were lining up in the tunnel to go onto the pitch. Ronaldo was a substitute and walked ahead of them to take his place on the bench. As he walked by the children who accompany the players onto the pitch, they had an awestruck reaction to the legendary player.

But some fans have accused Ronaldo of showing the kids the finger. A social media user commented, “Is he giving us the finger, or is it to the kids?” Ronaldo was holding a jersey in his hands as he walked past the players and kids onto the bench. He remains doubtful to start Portugal’s next game against Morocco on Saturday.

Is there any truth to the claims?

There is no truth to the claims of the fan. Ronaldo was simply walking through the crowd holding a jersey in his hands. His hand was in an unfortunate position which led some to believe he was showing the finger to the kids in the tunnel. The kids looked awestruck and wanted to meet their idol.

Ronaldo with kids in the tunnel pic.twitter.com/Ir0Z4g4OGE

Portugal face a tough test against Morocco on Saturday. They are coming from a huge win over Switzerland and would have gained huge confidence from it. The match will in all likelihood see Portugal attack for a majority of the game, and Morocco defend as they did against Spain. But Portugal’s attack consisting of Joao Felix, Bruno Fernandes, Bernardo Silva, and Goncalo Ramos could pose a much bigger threat than Spain did.