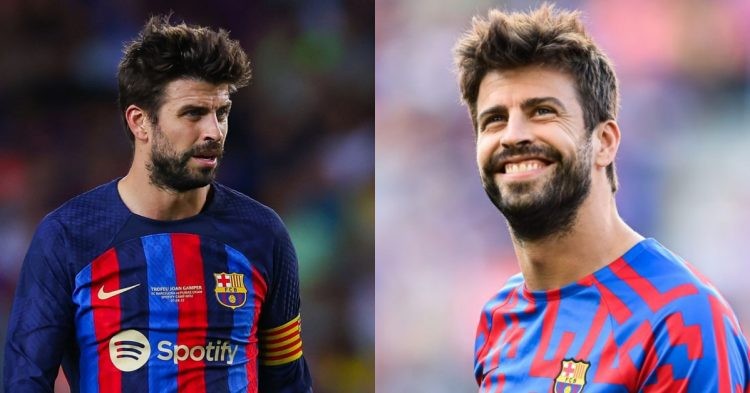 Gerard Pique will retire after the match against UD Almeria. (Credit: Twitter)

Gerard Pique is set to call it quits after 18 years of playing senior-team soccer. On his Instagram account, he confirmed the news with a video. He spoke about his love for Barcelona since his childhood days and announced the upcoming match against UD Almeria will be his last game for the Spanish giants.

The 35-year-old was not a regular started for FC Barcelona in the ongoing season. He played in 5 La Liga matches and 4 Champions League ties. His mistake against Inter Milan saw Barcelona concede a goal which proved to be very costly. It was evident that Pique was not the same player he was a couple of seasons ago. So a lot of fans wondered what his next move will be.

Gerard Piqué announces he is retiring from football and will play his last match for Barcelona this Saturday 🔵🔴 pic.twitter.com/yCe6gg9sk7

Bringing an end to all the speculations, Pique confirmed his retirement from the sport altogether. In his announcement video, Gerard Pique stated his gratefulness to Barcelona. Despite his retirement, the Spanish international promised to support the Catalonian side with all his heart.

“Culers, it’s Gerard. In the last few weeks, months lots of people have been talking about me. Until now, I haven’t said anything. But now, I want to be the one talking about me. Like Many of you, I’ve always been a Barca fan. I was born into a football loving family of Barca fans. From a very young age, I didn’t want to become a footballer. I wanted to be a Barca player.”

The star soccer player has been in the news lately for all the wrong reasons. After rumours of him cheating on his ex-partner Shakira, the couple publicly announced their separation. It also affected his performance on the field. The club will terminate his existing contract after his last game this Saturday.

Gerard Pique is one of the finest defenders this generation has seen. He started playing soccer at a very early age and spent a lot of his time in the Barcelona youth academy. From 1997 to 2004, he was a part of Barcelona’s youth set-up. But he left the club of his dreams to pursue his passion in England. In 2004, Pique signed for Manchester United.

He was a part of the Red Devils from 2004-2008. During his time in Manchester, he won the 2007-08 English Premier League Trophy, the 2007 FA Community Shield and the biggest prize in club soccer, the UEFA Champions League in the 2007-2008 season as well. But he only made 12 appearances for the senior team in Manchester before returning to Spain in 2008.

His run as a Barcelona player will go down as one of the best in the club’s history. He played over 600 games for Barcelona and won every trophy possible! He is an 8-time La Liga winner, a 7-time Copa del Rey winner, and a 6-time Supercopa de Espana winner. He also won 3 Champions League trophies, 3 UEFA Super Cups and 3 FIFA Club World Cups for Barca.

In his 102 appearances for the Spanish national side, Pique was a rock in the defence. He won the FIFA World Cup in 2010 and the UEFA European Championship in 2012.