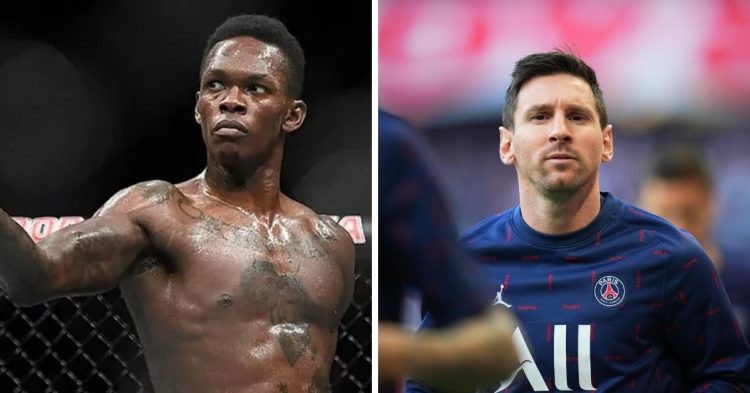 Recently, a remarkable video surfaced on the internet of the legendary Lionel Messi in training with his teammates. The video focused on Messi, who received a long ball with his trademark silky smooth style, showcasing his renowned ‘Messi Magic’.

The video was shared by ESPN and was quickly ‘liked’ by the former UFC fighter Israel Adesanya on Instagram, who was clearly impressed by the skills of the PSG star. This is yet another example of Messi’s mastery on the soccer pitch and shows that even when training with his teammates, he is still able to pull off spectacular moves.

The video also serves as a reminder of the immense talent that Messi possesses, and it is no wonder why he is widely regarded as the greatest of all time. The video has been widely shared by fans all over the world, and it is clear to see why.

Many individuals in the remarks have hypothesized that the video may have been reversed, yet we as a whole know that Lionel Messi is capable of performing any remarkable feat with a ball.

Messi’s skill and technique on the ball are something that is truly mesmerizing to watch, and it is no surprise that even after all these years, he is still able to perform at the highest level. It is yet another reminder of why Lionel Messi is considered to be the greatest of all time, and why he is still the player that many aspire to be.

Lionel Messi’s performance vs Angers on his Ligue 1 return

Lionel Messi made his much-anticipated comeback to PSG after winning the 2022 World Cup, as the French powerhouse hosted Angers at Parc des Princes, and he provided an ideal encore by netting the team’s second goal in a 2-0 triumph.

Angers did not pose a great deal of danger during the match, having little effect on PSG’s dominance. The home side was a bit anxious at times, but they were in a secure position overall. Hugo Ekitike’s goal in the fifth minute provided PSG with a sense of assurance for the remainder of the match.

It was obvious that, given the current injury situation, PSG boss Christophe Galtier warned his team not to take any unnecessary risks. This prompted some jeers from the home supporters, as PSG seemed to have no motivation to move forward.

Angers felt encouraged since they were still down by only one goal with 20 minutes left, but Messi’s goal was upheld after a Video Assistant Referee check, thus eliminating any chance of a shock result. PSG have increased their lead at the top of the French league table to six points after their win. Angers, on the other hand, remain rooted to the bottom, having not earned a point since September.