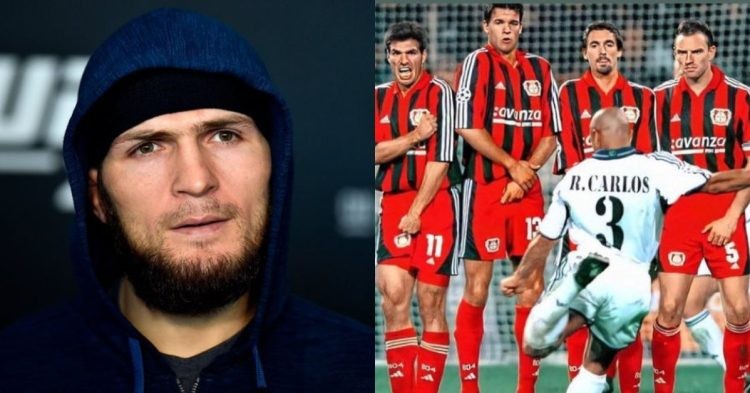 In the story, Roberto Carlos was seen taking a free-kick in his signature fashion against Bayer Leverkusen. It seems that the former UFC lightweight champion was enjoying UEFA Champions League highlights.

In Khabib’s story, Roberto Carlos can be seen striking the dead ball. Carlos was taking a free-kick in the 2000/01 match between Real Madrid and Bayer Leverkusen. The Brazilian struck the ball hard and low. It whizzed past Leverkusen’s wall and straight into the back of the net as Carlos opened the scoring in the 32nd minute. Watch the goal here.

David Alaba has been the first defender to score from a direct free kick for Real Madrid in Champions League since Roberto Carlos in February 2004 ✅#UCL #RM pic.twitter.com/04hlPLrVVt

To this day, Roberto Carlos’s exploits as a fullback and his menacing free-kick-taking abilities are fondly remembered among soccer fans. The Brazilian is remembered as one of the best fullbacks to ever play the game. He was a goal-scoring defender as is amply demonstrated by his record at Real Madrid. The World Cup Winner scored a whopping 70 goals in over 500 appearances for Los Blancos.

Roberto Carlos was a free-kick specialist. He just loved to swerve the soccer ball into the back of the net from a set piece. So much so that he reportedly had a weekly wager with his teammate and former Galactico David Beckham. This wager usually revolved around some sort of contest with regard to set pieces.

The free-kick-taking technique of the former Real Madrid man was a fan favorite. It seemed that every time Carlos struck the ball from a set piece, it was destined to fly into the net. He struck the ball with immense power. In one remarkable instance, the 49-year-old defied physics to score a spectacular free-kick goal. In a 1997 game against France, the ex-Inter Milan player did the impossible.

From 40 yards out, he struck the ball hard in a manner that it seemed it would fly wide, however, the ball almost boomeranged back into the direction of the goal and went into the net. It was a historic moment for the sport.

There was a certain uniqueness in the way that Carlos used to strike the ball. The Brazilian, while speaking to FourFourTwo, revealed the secret to his technique: “I always kicked the ball from its bottom-left to the top-right, which helped it swerve.”

Whenever a debate regarding the best set piece expert of all time surfaces, Roberto Carlos is bound to be part of the conversation. He was definitely at par with the likes of Andrea Pirlo, David Beckham, Lionel Messi, Ronaldinho, and Juninho. “El Hombre Bala”, or the Bullet Man, has certainly made his mark on soccer.