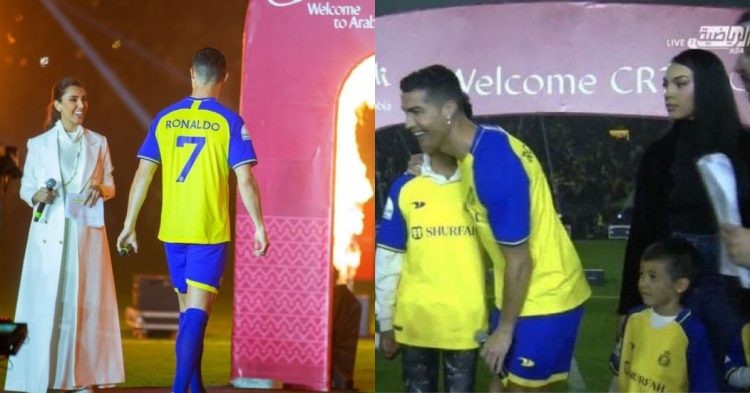 Cristiano Ronaldo has been officially unveiled as an Al-Nassr player. The Portuguese signed a bumper contract worth more than $200 million per year after mutually terminating his contract with Manchester United. On Tuesday, Ronaldo was presented to the Al-Nassr fans at a packed Mrsool Park. Journalist Fatma Fahad was one of the presenters on the ground and fans noticed that the 37-year-old was looking at her a lot.

During his press conference before his visit to the stadium, Ronaldo stressed how he has won “everything in Europe” and has now selected a new challenge. He said, “I’m a unique player. It’s good to come here, I broke all the records there [in Europe] and I want to break a few records here.”

Later, when he was introduced to the ground, the packed 25,000-capacity stadium erupted. Ronaldo walked out in the yellow and blue of Al-Nassr. His girlfriend Georgina Rodriguez followed at a distance along with Ronaldo’s children. Rodriguez was spotted wearing the traditional black abaya which is worn by most Saudi women.

According to one fan, Ronaldo “kept looking at her instead of looking at the press at the conference.”, in reference to Ronaldo’s repeated gazes toward the journalist.

That’s exactly what i was noticing. 🤣🤣 He kept looking at her instead of looking at the press at the conference. https://t.co/amQ2qf8JDX

Ain’t even married to him.

Rodriguez gave Ronaldo the death stare when she noticed that the Portuguese was looking at the journalist. Rodriguez even ignored him once when he looked at her.

Who is Fatma Fahad?

Fatma Fahad is a Saudi Arabian citizen who is a journalist and news anchor at Al Arabiya. According to Arab News, Fatma has immense charisma and a strong presence on the small screen which rose her to prominence.

One of her biggest moments came during a joint press conference between Austria and Saudi Arabia. She skillfully welcomed Saudi Foreign Minister Prince Faisal bin Farhan in Arabic but later switched to German to welcome Austrian Minister Alexander Schallenberg. She earned the respect of both the minister and the audience. Fahad is the host of Al Arabiya’s 4 p.m. news segment.

How long have Cristiano Ronaldo and Georgina Rodriguez been together?

After Ronaldo ended his five-year relationship with model Irina Shayk due to some internal issues, he met Rodriguez at a Gucci store in Madrid in 2016. She used to work there as a sales assistant. Shortly after, they began dating.

2. Ronaldo met with the love of his life, Georgina Rodriguez, in 2016 at a Gucci store where she worked as a shop manager

Rodriguez shared a bit about the early days of their relationship on her Netflix series “I Am Georgina”. She said, “many times he’d come after work. He would come, I remember once, once in a Bugatti. My coworkers went crazy. They get there on the bus, and I would leave in a Bugatti. I mean people couldn’t believe it.”

They have been together since 2016 which means they are in the seventh year of their relationship.