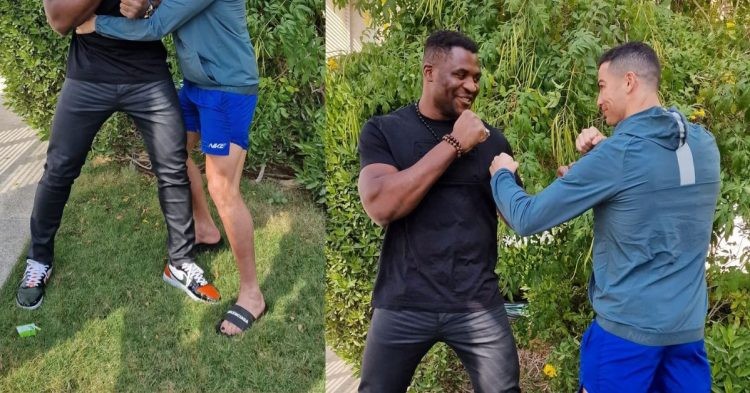 Cristiano Ronaldo and Francis Ngannou squared up for a jokey face-off in Saudi Arabia on Saturday. The Portuguese soccer star and former UFC heavyweight champion had an unlikely staredown, ending with Ronaldo hugging Ngannou. However, in the Twitter post shared by the fighter, fans noticed Ronaldo wearing black nail polish on his toes.

Georgina’s hand work. Without a doubt’

One fan said, “Georgina’s hand work. Without a doubt”. He implied that Georgina was practicing painting on Ronaldo’s toes. Many fans had a similar reaction with a few of them claiming Ronaldo’s daughter did it. Here are a few fan reactions to Ronaldo’s uncanny appearance.

His daughter did it!!

Ronaldo is now playing for Saudi Pro League side Al-Nassr after signing a bumper contract worth more than $200 million a year. Ngannou, on the other hand, is currently a fighting free agent. The former UFC fighter, who is still recovering from injury, was stripped of his belt this week. This happened because the company accepted Ngannou was out of contract.

At present, Ngannou is recovering from a surgery he had to repair the ACL (Anterior Cruciate Ligament) and MCL (Medial Collateral Ligament) in his right knee last year. The Cameroonian fighter is planning to return to action this summer, however, while on his holiday, he linked up with Ronaldo this weekend.

In a funny video posted on Twitter, the pair squared up to one another. The fighter captioned the tweet, “Great talking with the (GOAT emoji) in Riyadh today. Very inspirational!” Ronaldo quickly decided to de-escalate the situation. In the end, he burst out laughing and decided to hug Ngannou.

This is not the first time the former Manchester United star has been spotted wearing black nail paint on his toes. Even though it might be believed, like a few fans, that it is done by his girlfriend or daughter, it might actually not be so.

The earliest he was spotted sporting a painted toenail was in 2010. Right after news broke out about him having a son whose mother is unknown. It was Cristiano Ronaldo Jr., however, at that time he had no daughters so the daughter theory makes no sense.

it is a care so that his nails do not break. The vicious always trying to belittle the goat..

According to reports, this is also a thing among fighters. Apparently, wearing a coating of nail polish on the toes helps prevent a broken nail. The nail polish hardens your toenail. It minimizes the danger of the toenail being battered, in this case, while shooting the ball or getting tackled.